A Closer Look At Turmeric 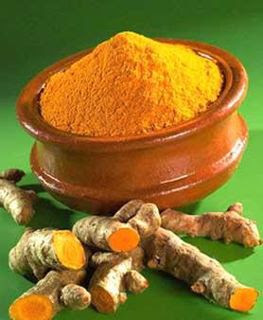 Turmeric, best known as one of the ingredients used to make curry

It also gives mustard it's bright yellow color. The plant is a large-leaved herb, closely related to ginger. The thick, rounded, underground stems or rhizomes, are what constitute the spice, turmeric. India is the world's primary producer of turmeric. In recipes outside South Asia, turmeric is sometimes used as an agent to impart a rich, custard-like yellow color. It's used in canned beverages and baked products, dairy products, ice cream, yogurt, yellow cakes, orange juice, biscuits, popcorn color, sweets, cake icings, cereals, sauces, and gelatins. Indian turmeric is considered to be the best in the world. To say turmeric is an ancient herb is a real understatement. The earliest reference about turmeric can be seen in Atharvaveda, around 6000 BC where turmeric is prescribed for jaundice. It was also prescribed in the treatment of leprosy. 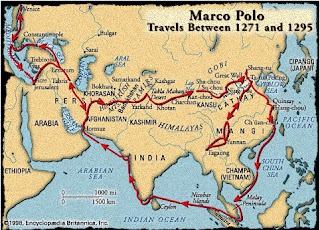 Turmeric was listed as a coloring plant in an Assyrian writing around 2600 BC. Marco Polo, in 1280 AD, mentioned turmeric as growing in the Fukien region of China. It seems that the true turmeric came to India from the ancient regions of China either though the movement of the ancient tribal people during their migration to the Northeast region of India, or through the Buddhist monks and ancient travelers who reached India during the post-Buddha era. To the ancient world turmeric was not a spice but was a dye and a remedy for many ailments. Turmeric is also cultivated in tropical countries. The ancient Hawaiians also used this herb for many things, including the prevention and treatment of sinus infections because it is very astringent, ear infections like swimmers ear and gastrointestinal ulcers. 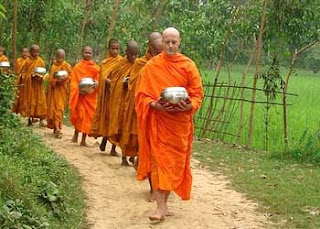 Turmeric has several good health benefits. It can help with digestion problems, also the latest research has found, that turmeric could be an effective enhancer of an enzyme that protects the brain against oxidative conditions, such as Alzheimer's disease. Turmeric could be used to diminish the progression of chronic and age associated neurodegenerative disorders. Two teaspoons of turmeric contains 1.88 milligrams of iron, 0.08 milligrams of vitamin B, 0.96 grams of dietary fiber, 114.48 milligrams of potassium and 0.36 grams of manganese. In March 1993, researchers at Harvard Medical School published results of laboratory tests of a new method of
screening for potential AIDS drugs. They used genetically engineered cells to test for inhibitors of the "LTR" (long terminal repeat) sequence in HIV. 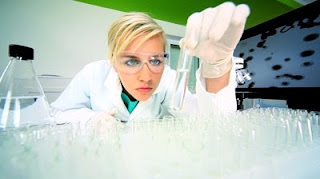 The LTR is important for viral activation. The new test found three inhibitors, one of them is curcumin, a chemical found in the food spice turmeric. It was effective against HIV in both acutely and chronically infected cells. In Trinidad, about 40% of the population is of Indian descent, and uses curry extensively in their diet. Another 40% of the population is of African descent, and seldom uses curry. Several years ago, studies of AIDS in Trinidad found that persons of African descent were more than 10 times as likely to have the disease as persons of Indian descent. Interesting, yes mon. Why haven't you heard of this treatment? Easy, large pharmaceutical companies have little commercial or professional incentive to test low-cost, non-proprietary treatments. They don't care if you get better only if they make money. They would rather you didn't get better so you can continue to be treated with drugs. Research activity into curcumin and turmeric is increasing. In September 2012, the U.S. National Institutes of Health had seventy-one registered clinical trials completed or underway to study curcumin for a variety of clinical disorders. 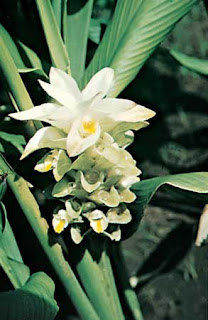 The volatile oil fraction of turmeric has demonstrated significant anti-inflammatory activity in a variety of experimental models. Even more potent than its volatile oil is the yellow or orange pigment of turmeric, which is called curcumin. Curcumin is thought to be the primary pharmacological agent in turmeric. Clinical studies have substantiated that curcumin also exerts very powerful antioxidant effects. As an antioxidant, curcumin is able to neutralize free radicals, chemicals that can travel through the body and cause great amounts of damage to your healthy cells. This is important in many diseases, such as arthritis, where free radicals are responsible for the painful joint inflammation and eventual damage to the joints. Turmeric's combination of antioxidant and anti-inflammatory effects explains why many people with joint disease find relief when they use the spice regularly. Curcumin can also help the body to destroy mutated cancer cells, so they cannot spread through the body and cause more harm. Curcumin does it by enhancing your liver function. Curcumin, the phytonutrient found in turmeric, and quercitin, the antioxidant in onions, reduce both the size and number of precancerous lesions in the human intestinal tract, shows research published in the August 2006 issue of "Clinical Gasteroenterology and Hepatology." Curcumin may be able to prevent the oxidation of cholesterol in the body. Since oxidized cholesterol is what damages blood vessels and builds up in the plaques that can lead to heart attack or stroke. In research published in the Indian Journal of Physiology and Pharmacology, 10 healthy volunteers consumed 500 mg of curcumin per day for 7 days, not only did their blood levels of oxidized cholesterol drop by 33%, but their total cholesterol droped 11.63% , and their HDL (good cholesterol) increased by 29%. Turmeric is also taken in capsule form, for those who would prefer to ingest more than is possible in a normal diet. For instance, to relieve inflammation. 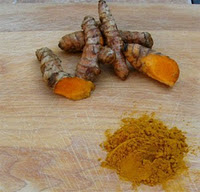 Even through you can find herbs and spices in most chain supermarkets, explore the local ethnic markets or organic farms in your area. These stores feature an expansive selection of dried herbs and spices that are of usually of superior quality and freshness when compared to those offered in most supermarkets. Just like with other herbs and spices, try to select organically grown turmeric since this will give you more assurance that the herb has not been modified, irradiated or doused with pesticides. Since the color of turmeric varies among varieties, it is not a criterion of quality. For the most curcumin content, and benefits be sure to use turmeric rather curry powder. Turmeric powder should kept in a tightly sealed container in a cool, dark and dry place. Fresh turmeric rhizome (root) should be kept in the refrigerator. To prevent staining your hands, you might consider wearing kitchen gloves while handling turmeric, as it is a very competent dye. Try some fresh turmeric the next time you stir fry up some veggies with onions, garlic, cashews and chicken. My favorite! Use your imagination or look up some of the many recipes on the web, and enjoy this great tasting healthful spice. The video shows how to make a homemade turmeric supplement. Good Luck...