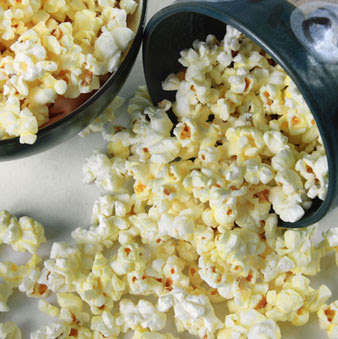 A Movie Without Popcorn? Bite Your Tongue...


One of my most favorite things in life, apart from finding money in a piece of clothing I haven't worn for a while, is finding out that a food I really like, is scientifically proven to be super nutritious. That's what happened with Popcorn. Popcorn, a snack food weight watchers used to run from, can actually strengthen our immune system. First a little history. Corn is able to pop because, it's kernels have a hard moisture-sealed hull and a dense starchy interior. This allows pressure to build inside the kernel until an explosive "pop" results. According to Wikipedia, Popcorn was first discovered thousands of years ago by the Guatemalans. It is one of the oldest forms of corn. There is also evidence of popcorn from 3600 BCE, found in New Mexico and even earlier evidence dating to perhaps as early as 4700 BCE was found in Peru. The English who came to America in the 16th and 17th centuries learned about popcorn from the Native Americans. 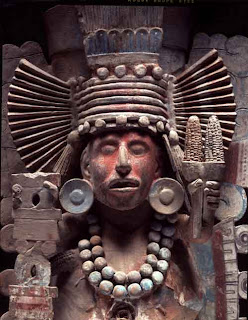 In 1519, Cortes got his first sight of popcorn when he invaded Mexico and came into contact with the Aztecs. Popcorn was an important food for the Aztec Indians, who also used popcorn as decoration for ceremonial headdresses, necklaces and ornaments on statues of their gods, including Tlaloc, the god of rain and fertility. French explorers, in the early 1600's, in the Great Lakes region, made mention in their documents, of the use of popcorn by the Iroquois. This popcorn was popped in pottery with heated sand. The Frenchmen took part in an Iroquois dinner that included popcorn soup and popcorn beer.
The colonists loved popcorn so much they served it with sugar and cream for breakfast. This was the very first puffed breakfast cereal. Popcorn machines, were invented in Chicago, Illinois, by Charles Cretors in 1885. Cretors's invention introduced the first patented steam-driven popcorn machine that popped corn in oil. Previously, vendors popped corn by holding a wire basket over an open flame, which was a dry, unevenly cooked snack. During the Great Depression, popcorn was comparatively cheap at 5–10 cents a bag and became popular. Thus, while other businesses failed, the popcorn business thrived and became a source of income for many struggling farmers. During World War II, sugar rations diminished candy production, causing Americans to eat three times as much popcorn as they had before. 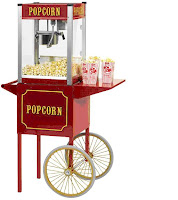 Today "air poppers"are the healthiest way to go. From $10-$25.00. They rapidly circulate heated air up through the interior, keeping the un-popped kernels in motion to avoid burning and then blowing the popped kernels out through the serving chute. However, the majority of popcorn sold for home consumption is now packaged for use in the microwave.

Dr. Joe Vinson Presented research at the American Chemical Society meeting. Dr. Joe Vinson, a professor of chemistry at University of Scranton, reported that popcorn may contain just as many healthful antioxidants, or even more, depending on how you measure them, as fruits and vegetables. Antioxidant compounds are called polyphenols, which we know help eliminate free radicals (damaging cells) in the body. Antioxidant's have been associated with reducing internal inflammation and thereby combating cancer, they are commonly found in produce. Vinson and his colleagues also found them in popcorn, by grinding up the popped kernels, including the waxy hulls, and simulating the digestion process that would normally occur in the stomach. About 1.5% by weight of air-popped popcorn is made up of polyphenols, the researchers found. So, the per unit weight, Dr.Vinson's team found, popcorn contained more polyphenols than fruits like pears and apples, but the "sand in your crack" is, most of the health benefits are packed into the hulls, (the part you choke on) not the fluffy white part. Since popcorn is 100% whole grain, it's also a good source of fiber, and as long as you choose organic, air-pop it or microwave and don't douse it in butter, oil or salt, it's a super healthy food. A little kosher or Sea Salt is ok, or any other spice you like. But consider this, according to DietFacts.com, a small popcorn from Regal Cinema Group (the largest theater chain in the United States) still contains 29 g of saturated fat, that's as much as three Big Macs and the equivalent of a full day-and-a-half's daily recommended intake. Also, FYI, one of the common artificial-butter flavoring agents in microwave popcorn diacetyl, has been implicated in causing respiratory ailments. 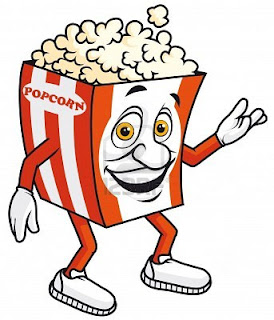 "Our findings aren't license to substitute popcorn in your diet for fruits and vegetables", says Dr.Vinson. For one thing, comparing the food's concentrations of polyphenols by weight is a little misleading, since fruits and vegetables are made up primarily of water, while corn kernels have very little water. That might account for the discrepancy. "Further, produce has a lot of other nutritious vitamins and minerals that you don't get from popcorn". Dr.Vinson says, "the results show that when prepared right, air-popped and undressed, snacking on popcorn isn't such a bad idea". So, bottom line, gram for gram, popcorn has three times more polyphenols than kidney beans (the highest vegetable polyphenol source) and four times more than cranberries (the best fruit source), according to the University of Scranton study. 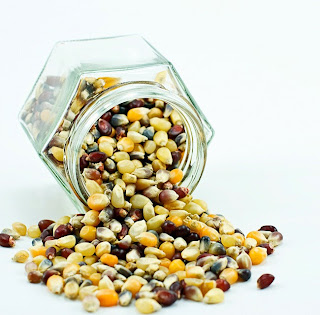 Also, popcorn eaters get 250% more whole grains in their diet than people who don't eat popcorn, suggests data from the National Health and Nutrition Examination Survey, published recently in the Journal of the American Dietetic Association. Three cups of popped popcorn, what you get by air popping 1 heaping tablespoon equals one of your three recommended servings of whole grains, and costs you a mere 105 calories, if you don't add butter. 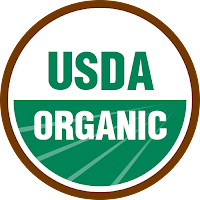 I can't emphasize enough always buy organic when shopping, especially with corn products. Corn is the most genetically modified crop on the planet. GMO corn is being traced back to many abnormalities and sickness in humans and animals. So pass on the butter, always buy organic and enjoy the benefits of popcorn, with a good movie and a friend this weekend it's gonna be cold. So try that kissing diet on for size. Good Luck...


American Academy of Pediatrics recommends not serving to children under four, because of the risk of choking.

And if you don't think there is enough microwave radiation in your cell phone to pop corn, watch this: