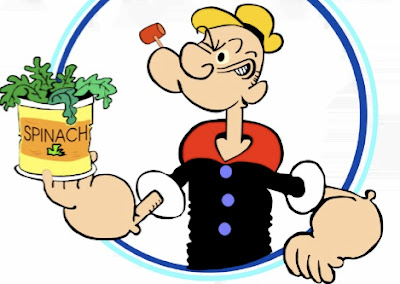 
I must admit when I was a child I practically packed my bags and left home every time my mom cooked spinach. She used to boil it to death until it smelled like the front lawn after a drenching rain, and I had to choke a helping down, because those were the days when you didn't leave the table until you cleaned your plate! When I grew up, I realized you could eat spinach raw on sandwiches, and salads, There was spinach pasta, spinach stuffed croissants, and spinach dip. At last Popeye and I were on the same page again. 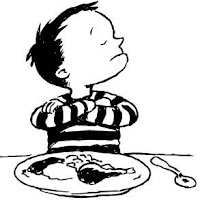 Spinach originates from the Middle East, most likely Persia or modern-day Iran. Spinach, which does not grow well in hot weather, was successfully cultivated in the hot and arid Mediterranean climate by Arab agronomists through the use of sophisticated irrigation techniques. The first references to spinach are from Sasanian Persia about 226-640 A.D., and we know that in 647 it was taken from Nepal to China where it was, and still is, known as the "Persian Green." The first written evidence of spinach in the Mediterranean are in three tenth-century works, the medical work by al-Razi and in two agricultural treatises, one by Ibn Wahshiya, and the other by Qustus al-Rumi. Spinach became a popular vegetable in the Arab Mediterranean and arrived in Spain by the latter part of the twelfth century where the great Arab agronomist Ibn al-'Awwam called it the "captain of leafy greens." In 1533, Catherine de' Medici became queen of France. She liked spinach so much that she insisted it be served at every meal. To this day, dishes made with spinach are known as "Florentine", reflecting Catherine's birth in Florence. Cultivation of spinach began in the USA around 1800. 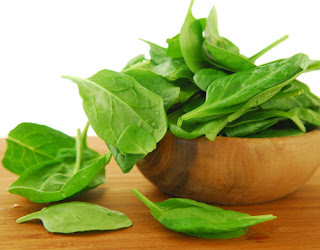 Spinach is an excellent source of bone-healthy vitamin K, magnesium, manganese, and calcium, heart-healthy folate, potassium, and vitamin B6, energy-producing iron and vitamin B2, and free radical-scavenging vitamin A and vitamin C. It is a very good source of digestion-supportive dietary fiber, muscle-building protein, energy-producing phosphorus, and the antioxidants copper, zinc and vitamin E. In addition, it is a good source of anti-inflammatory omega-3 fatty acids, and heart-healthy niacin and selenium. While this mixture of conventional nutrients gives spinach a unique status in the antioxidant and anti-inflammatory department, it is the unusual mixture of phytonutrients in spinach that "seals the deal" in terms of its antioxidant and anti-inflammatory components. In terms of flavonoids, spinach is a unique source of methylenedioxyflavonol glucuronides, and in terms of carotenoids, its difficult to find a more helpful source of lutein and zeaxanthin. The epoxyxanthophyll carotenoids neoxanthin and violaxanthin are also in spinach leaves. The natural nitrates found in spinach and other leafy greens feed muscular mitochondria, and thus help regulate blood pressure, immune defense, and cell metabolism. Inorganic nitrates, which are different than the synthetic nitrates commonly added to processed foods, are used by the body to produce nitric oxide (NO), a vital molecular component that delivers oxygen to blood and performs a variety of other physiological and pathological processes in the body. NO is a powerful anti-inflammatory, anti-thrombotic, and vasodilation agent, all of which result in numerous health benefits. 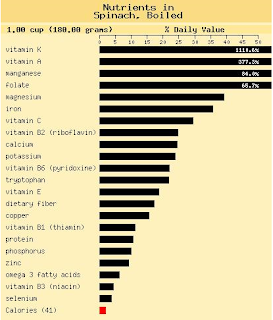 Spinach, along with other green leafy vegetables, is commonly known to be a rich source of iron. However, the absorption of iron depends on a number of factors. In the case of spinach, it contains iron absorption inhibiting substances, including high levels of oxalate which can bind to the iron to form ferrous oxalate, and renders much of the iron in spinach unusable by the body.
Spinach also has a high calcium content. However, the oxalate content in spinach also binds with calcium, decreasing its absorption. Calcium and zinc also limit iron absorption. According to Dr. Sue Rodwell Williams, author of many best-selling texts for practitioners over the past several decades, the calcium in spinach is the least bioavailable of calcium sources. By way of comparison, the body can absorb about half of the calcium present in broccoli, yet only around 5% of the calcium in spinach.


There are three basic types of spinach: 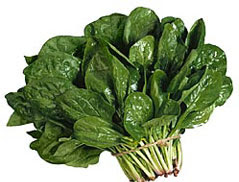 Currently, California & Texas are the major USA producers. It is found all year around at your grocery store. Choose fresh crisp bunches with vibrantly green leaves with no sign of yellowing, wilting or bruising. Spinach pairs best with, Zinfandel, Pinot Grigio, and Chenin Blanc wines. It also gets along with all aged cheeses like Parmesan and other dairy products. Now spinach is grown in sandy soil, so make sure you wash it thoroughly under water to remove all the grit. Cooking spinach causes it to have a more acidic flavor, so a lot of recipes will call for butter or cream added to counteract the strong flavor. Fresh raw organic spinach is my favorite. I use it in salads and on sandwiches instead of lettuce. Use Baby spinach, for eating raw, it's smaller, and has a more tender leaf. Don't wash your spinach until you use it, it won't keep as well. I store mine in green bags, http://www.evertfresh.com/ , and cooked spinach doesn't store well so finish it or pitch it. 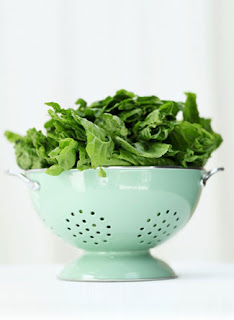 FYI, Spinach contain naturally occurring substances called purines. Purines are commonly found in plants, animals, and humans. In some individuals who are susceptible to purine-related problems, excessive intake of these substances can cause health problems. Since purines can be broken down to form uric acid, excess accumulation of purines in the body can lead to excess accumulation of uric acid. The health condition called "gout" and the formation of kidney stones from uric acid are two examples of uric acid-related problems that can be related to excessive intake of purine-containing foods. For this reason, individuals with kidney problems or gout may want to limit or avoid intake of purine-containing foods such as spinach.

It is important to wash raw fruits and vegetables before eating them to prevent an E. coli illness. It only takes a few cells of the bacteria to make a person sick. The organism is destroyed through cooking. The risks of getting sick from E. coli increase with vegetables that have edible parts that touch the soil, such as leafy vegetables. Some signs of E. coli are vomiting, diarrhea, severe cramps and abdominal pain. Any of these signs go to the emergency room immediately.

Wash your vegetables thoroughly under running water, lukewarm or room temperature. This is important to remove not only E. coli but also pests, and pesticide residue. Also available most places produce is sold these days are spray veggie wash products, USE THEM if you plan to eat raw veggies and you don't buy organic. Good Luck...