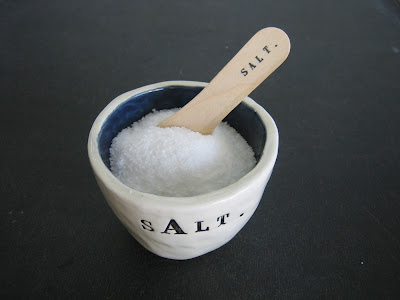 Dr. Jacques de Langre PhD. a Californian Biochemist says; "A basic lack of knowledge has for years promoted the belief that all salt is bad for you"


The heart muscle works harder on a low salt diet. A salt free, vegetarian diet can cause kidney, respiratory and blood sugar problems. Due to the excessive intake of greens. Vegetables are high in potassium and no salt, So an imbalance of sodium and potassium occurs. Eating a proper, well-balanced unrefined Salt, can help cleanse the plaque off blood vessel walls.


"Real SEA SALT is a matrix of all the elements that are the basis of our very make up as humans." - Dr Bruce West MD "Hand-Harvested SEA SALT lowers the blood pressure because it removes the excess sodium from the tissues" - Dr De Langre MD "High blood pressure lies not in salt intake but in an overactive hormone system" - Dr John H Laragh MD Cornell University Medical Centre

The research of Dr. John H. Laragh, M.D. and Dr. Mark S.Pecker, M.D. at the Hypertension Center of the Cornell University Medical Center, shows that the High Blood Pressure problem is not in salt intake but in an overactive hormone system. When this system is overactive, renin levels, are excessively high, indicating a physiological need for salt. Consequently, salt starvation could occur if the person is put on a low salt diet. On the other hand, low renin levels, which occur only in a third of hypertensive people, actually reveals sodium excess. Iodized table salt lacks the many trace minerals provided by natural unrefined, and sea salts. As part of the refining process table salt is stripped of all its trace minerals. These minerals are then sold to the chemical industry. What is misguided is that, a low-salt diet for the treatment of High Blood Pressure has been based on research regarding commercially refined table salt intake. 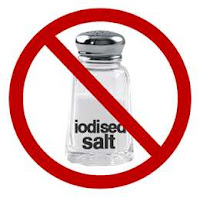 It seems for years now that the prevailing viewpoint of modern medicine has been that, salt is bad for your blood pressure, and must be eliminated from the diet, like alcohol and tobacco. Ask anyone, "what does salt do" and 9 of 10 will say it causes high blood pressure. In recent years people have been taught since childhood that, "salt causes high blood pressure". In part that's correct. Sodium Chloride or table salt can cause imbalances that will raise blood pressure. The truth is that unrefined naturally mined salts and hand harvested sea salt naturally contains an abundance of essential macro-nutrients. In 100% natural salt there are over 80 trace elements that act as a buffer to protect us from sodium chloride retention. So natural unrefined salts can actually lower blood pressure, because they remove the excess sodium from the tissues.

With the advent of industrial development, natural salt was "chemically cleaned" and reduced to the combination of sodium and chloride. What we refer to as table salt. It has been heated to 1200 degrees, and essential minerals and trace elements are removed as impurities. However, sodium chloride is an unnatural, isolated, unwholesome substance having nothing in common with natural salt. Similar to white refined sugar, salt was once regarded as white gold. Now it has been converted into white poison. This product is in just about every preserved, boxed, bagged or otherwise packaged or wrapped product you eat! Sodium chloride upsets your fluid balance and overburdens your elimination system. For every gram of sodium chloride that your body needs to process, your body uses twenty-three times the amount of cell water from adjacent cells, often killing them, trying to neutralize the invasive chemical. Also eating table salt causes excess fluid in your body tissue, which can contribute to: 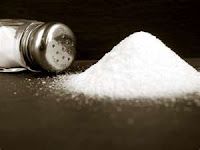 Sodium Chloride (table salt) is an aggressive substance, which biochemically, is perpetually seeking an equalizing counterpart so that the body’s pH can always remain neutral. Sodium chloride needs its natural counterpart in order for it to produce its effect. The natural counterparts, such as potassium, calcium, magnesium and other minerals and trace elements, demonstrate from a biophysical standpoint, specific frequency patterns. These patterns ensure the geometric structures in our body. When these structures are missing, we are without energy and are lifeless. Salt should not be used just to add flavor to our food, but for its vibration pattern, which is similar to the composition of our bodies. The table salt industry has been successful at convincing most people that there are actually health advantages to adding potentially toxic iodine and fluoride to salt. In addition, your table salt can contain dangerous chemicals disguised as preservatives not required to be listed on the packaging. Ones like aluminum hydroxide which is often added to improve the ability of table salt to pour. Aluminum is a light alloy that deposits into your brain. Which some researchers contend could be a potential cause of Alzheimer's disease. Sea salt composition, according to Wikipedia stays pretty constant at:

Chefs and people who cook often, like myself agree on the better taste of the natural salts, but looking at it from a health perspective, this is what really puts it over the top as far as a the right choice. 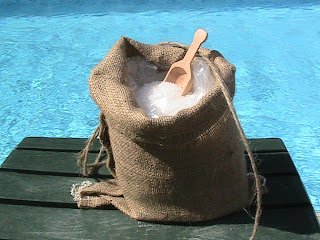 First let me say this, cheep mass-manufactured AMERICAN SEA SALT is not to be confused with fine natural sea salts. American sea salts, often found in grocery stores, are manufactured products that have been totally refined until they are no better than sodium chloride, ordinary table salt. Yet, because the salt originally came from sea water, this CRAP can be labeled sea salt. I love this country, this is how big business in this country uses loopholes to devastate your health. It's because these salts are harvested from general sea water, not pristine sources like natural sea salt ponds, that they need refining, to remove pollutants, bleaching, and other suspect additives. 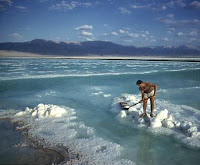 Beneficial sea salt is harvested in all corners of the world, even in America. Primarily by the age-old process of evaporating seawater naturally by sun and wind as it is held in large, shallow ponds or in large pans. The flavor is clean and mild with texture that delivers a strong crunch.
Some types of sea salts are also called finishing salts because they are costly and meant to be sprinkled onto food just before serving. Among the most prized is Fleur de sel, or "flower of salt," which refers to salt that is skimmed off the surface of the evaporation pans by hand while using wooden tools in the technique of artisans from long ago. Like sea salt, kosher salt is unaltered without additives and is always an inexpensive alternative. 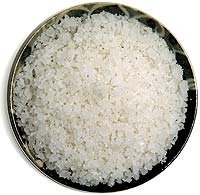 Fleur de Sel:
Long prized by chefs and gourmets for its high quality, fleur de sel provides a very delicate and somewhat earthy flavor and a delightful crunch; it is less salty than most salts. It is an excellent cooking and finishing salt, smooth with a light crunch. 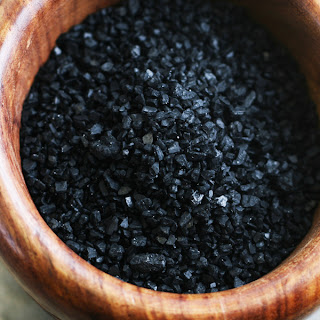 Black Hawaiian Salt :
Is highly prized for its deep color and coarse texture. The color of this salt comes from activated charcoal, which bonds with the crystals during evaporation, creating a shiny blackness that is surprisingly dark and appealing. Hawaiian black sea salt is used both as a finishing salt and a roasting salt. It is often used as a coating on fish to help preserve both flavor and moisture as it bakes. In legend, it's great to use in removing jinxes and also to keep away evil forces or bad neighbors. 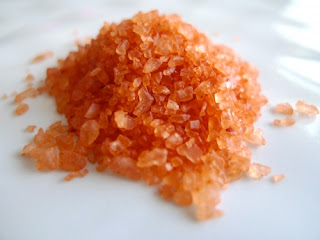 Alaea Salt:
Alaea salt is an unrefined sea salt found on Kauai. The salt gets its pinkish-brown color from Hawaiian clay, called "alaea", that washes from streams to tide pools in the sea. It's rich in iron oxide. Alaea is also used in several traditional Hawaiian dishes such as Kalua Pig, Hawaiian Jerky. 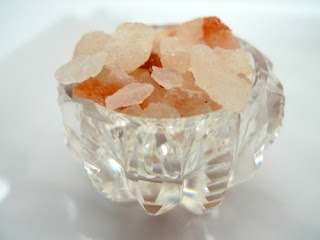 Is not a salt from the modern sea, but from a sea from long ago, and my absolute favorite finishing salt. It is mined in the Khewra Salt Mines, the second largest salt mine in the world, located in Khewra, Jhelum District, Punjab, Pakistan, about 300 km from the Himalayas. The salt comes out in a reddish or pink color, with some crystals having an off-white to transparent color. The color comes from iron oxide. Himalayan salts are harvested from ancient salt deposit's that would have been created long before there were any modern pollutants. 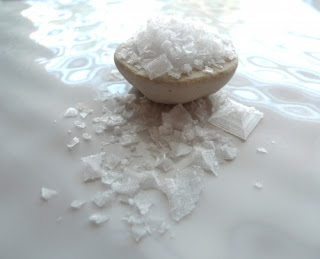 Maldon Salt:
A sea salt with unique pyramid-shaped, flaky crystals that comes from the Atlantic waters near the Maldon region of Essex, England, a salt-producing center since the Middle Ages. The salt is created when the waves from the sea wash up over the rocks and leave pools of water, which are evaporated by the sun, leaving the salt on the rocks. The salt crystals are used whole or ground for cooking seasoning and preserving foods. Maldon is considered to be a good finishing salt that provides a light, delicate flavor. 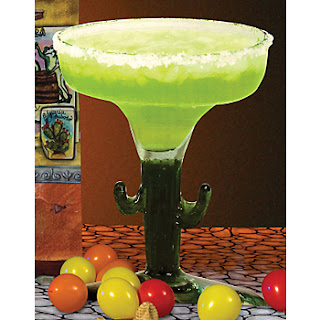 Margarita Salt:
A general term for a coarse ground salt, often kosher salt, used to coat the rim of a margarita glass. It should provide crunch but also dissolve quickly on the tongue. A piece of lime is rubbed around the glass rim to moisten the surface of the rim to enabling the salt to adhere. Margarita salts are available flavored with lime or other fruits such as mango.

There is significant consensus around the world that there are real benefits to be gained by using untreated natural salt's. Natural salts may even reduce the risk of heart disease and stroke.
As for that refined sodium chloride masquerading as real salt I can only hope you will run to your cupboards, and grab any you have and toss it. GO DO IT NOW! Good Luck...

FOR A FREE INTRODUCTORY WORKOUT OR DIET CONSULTATION PLEASE CONTACT ME DOC MASTERS AT flexappealdoc@hotmail.com