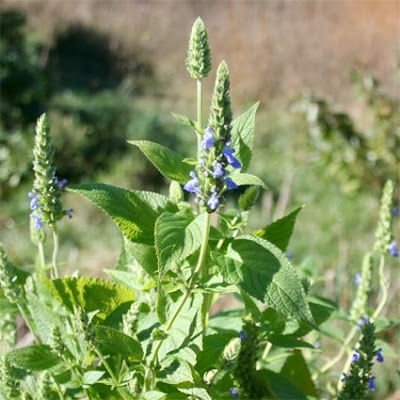 Chia is the Maya word for strength

Cah-Cha-Cha Chia, yep that's what we're talking about. In 1982, a California company released the Chia Pet, an animal-shaped terracotta figurine, that Chia seeds were planted inside and then sprouted, creating a soft green fur. There is evidence that Chia was first used as food as early as 3500 B.C., and served as a cash crop in central Mexico between 1500 and 900 B.C. The seeds were eaten alone and mixed with other seed crops, drank as a beverage when dissolved in water, ground into flour, included in medicines, and pressed for oil. Aztec rulers received seeds as an annual tribute from conquered nations, and the grain was offered to the gods during religious ceremonies. Chia is a species of flowering plant in the mint family.

The use of the seed salvia hispanica, commonly known as Chia, dates back to the 12th century. Chia is native to central and southern Mexico as well as Guatemala. Today it is found as far north as the Mojave Desert in the American Southwest. It was cultivated by the early Aztec and Mayan cultures and was quite valuable to them for several reasons. Evidently most pests do not like Chia, so they are easy to grow organically. Legend has it that Chia seeds were the basic survival ration of Aztec warriors, one tablespoon was believed to sustain a person for 24 hours. So Aztec traders also packed them as a food that was light and traveled easily, because of the many hundreds of miles they traveled on their trade routes. 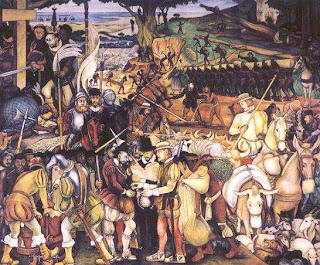 When the Conquistadors under the command of Hernando Cortez arrived in Mexico on November 8, 1519, they sought to establish their own rule by subjugating and plundering the legendary nation of the Aztecs. Cortez quickly realized that Salvia Hispanica (Chia) was at the very core of the Aztec nutritional foundation. It was an integral part of the rich and mysterious ceremonial pageants that were vital to their religious and spiritual culture, and became a symbol of life itself. The Aztecs believed it gave them mystical, almost supernatural energy and power. During the Conquistadors relentless campaign of terror and oppression, Cortez was convinced that if he could destroy the crop, he would win the empire and become master of all he surveyed. Acre upon acre was then set ablaze and a brutal battle of wills had begun, a battle that would eventually bring the Aztecs to their knees, leaving the magnificent "Kingdom of Gold" in ruins. After the Spanish conquest of Mexico, the mysterious seeds were probably introduced to Spain around 1521. It was famed botanist Carl Linnaeus (1707-1778) who gave chia the botanical name Salvia hispanica L., which was by this time growing wild in Spain and was mistakenly classified as a species native to that country. The Latin word for Spain is hispanica. The Aztecs ate the seeds of this semitropical plant to improve their endurance. They called it their "running food" because messengers could purportedly run all day on just a handful. The Aztecs prized this grain more highly than gold and they even used it as medicine. 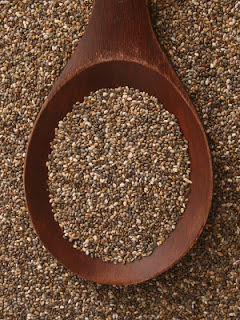 Chia seeds typically contain 20% protein, 34% oil, 25% dietary fiber mostly soluble with high molecular weight, and significant levels of antioxidants, chlorogenic and caffeic acids, myricetin, quercetin, and kaempferol flavonols. The oil from chia seeds contains a very high concentration of omega-3 fatty acid is approximately 64%. Chia seeds contain no gluten and trace levels of sodium. There are no known toxic components of Chia. Chia has a slightly nutty flavor. They are an even better source of omega 3's than flax and unlike flax seeds, they do not need to be ground to receive their nutritional benefits. Remember that omega 3 fatty acids reportedly protect against inflammation and heart disease. Chia seeds are also loaded with antioxidants, vitamins, minerals, protein and fiber. Acording to Dr. Oz they have "the highest antioxidant activity of any wholefood, even more than fresh blueberries." I found the list of minerals found in Chia seeds to be pretty impressive as well. They include calcium, phosphorous, magnesium, manganese, copper, niacin and zinc. Here's an interesting one. Researchers believe that the gel that forms when chia seeds are soaked in a liquid (they can hold 10x their weight in water) also forms in the stomach. They believe that this gelatinous material slows down the rate in which our bodies convert carbohydrates into simple sugars, thus preventing or reducing sugar spikes. The thought is that chia seeds would be beneficial for diabetics. My thought is that maintaining an even blood sugar level and consequent energy level would benefit anyone especially athletes. There were a few other positive claims that I found on the internet but I couldn't find reported studies. One is that the hydrophilic (strong affinity for water) nature of chia seeds will help an athlete stay hydrated. I would assume these would be pre-soaked but it didn't say. Another is the idea that chia seeds will enhance one's endurance. It sounds win-win but you'll have to decide this one on your own. So let's see some of the health benefits of Chia Include:


The best recommendation I can find is two daily doses of about 20 g each. But once again there are no side effects of using Chia that I have found. So how much to use is entirely up to you, and your digestive system.  They offer not just nutrition, but an amazing moisture-holding and binding ability. And, it does not take very much Chia to really make a difference in a recipe. They can add much-desired "bounce" or sponginess to recipes like breads and pancakes and the like. Or thicken your favorite smoothie. Find a good organic source and try some Chia seeds alone or with your favorite food soon. Good Luck...