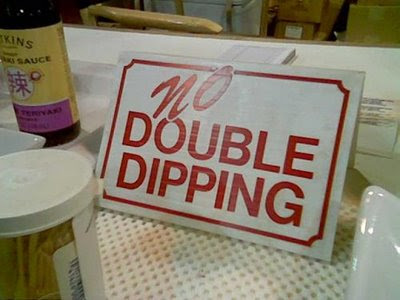 Are You Guilty; Of Holiday Double Dipping !!

This behavior was nationally revealed after a Seinfeld episode aired many years ago, in which the character George Costanza was caught in the act of double-dipping. So now you're at a party. You grab a big crunchy taco chip and dip it into a dish salsa. Now you're left with half of a chip with no salsa on it. You look at the half eaten chip. You glance around the room to see if anyone is watching... 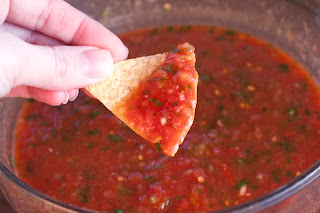 Before you give in to the temptation to double dip that chip, consider the findings of a study done by Prof. Paul L. Dawson, a food microbiologist at Clemson University, published in the Journal of Food Safety on the effect of pre-biting a chip on bacterial transfer to the dip, a.k.a. "double dipping". Eight volunteer "chip dippers" dipped chips and crackers into different dipping solutions three to six times. Half the dippers bit the chip once between dips, the others re dipped unbitten chips or crackers. Dips included cups of sterile water as well as commercial dips of different consistencies and with different common ingredients, like nacho cheese, chocolate, and salsa. Without question, double dipping significantly contaminated the dip with oral bacteria. After three dips of an unbitten chip or cracker there were fewer than 800 bacteria in the dip, after three dips by a pre bitten chip, the bacterial levels in the dip shot up to 500,000 per cup! Several factors contributed to just how much bacteria ended up in the dip. Higher acid dips inhibited bacteria initially, but after sitting for two hours the acidic dip was just as high in bacteria as the more neutral dips were. Dip viscosity also influenced bacteria transfer. Thicker, stickier dips meant that more of the dip that touched the bitten end of the chip stayed stuck to the chip, rather than remaining in the bowl. 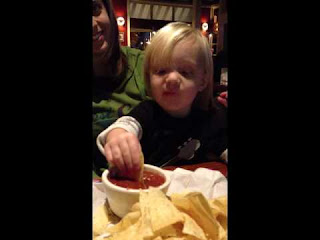 Guess what hepatitis A and other communicable diseases can be transmitted through a fecal-oral route, so if the person who indulged in some of the almonds from that nut bowl skipped washing their hands after a trip to the bathroom, you could get more than you bargained for in your next bite. Make sure there is a spoon tongs or some other way to grab some nuts other than with your hands. This is where you have to be particularly vigilant of the children if they are present at the gathering you are attending. The little crumb snatchers are germ incubators with no bathroom manners, and notorious double dippers, hand dippers, etc.

So while we always knew double dipping at public gatherings is seriously anti-social and rude. We now can confirm it's quite unsanitary also. If you're the party host and have a shared chip bowl at your next gathering, here are a few tips to prevent double-dipping:
When attending gatherings this season with a buffet, remember food that's left out on a buffet table for hours has plenty of time to turn ugly. Make sure foods you eat that need to stay warm are kept warm, like meat dishes. Also foods that need to be kept cold are kept cold like shrimp and eggnog. If you get to the party late, skip the cooked foods and stick with the cheese and crackers, and you'll be ok.

The real truth is that most dips, store-bought or homemade already contain some bacteria. Double-dipping however will add significantly more microbes than the ones swimming in your salsa to begin with. So, if you wouldn't french kiss everyone at the party, keep an eye out for double dippers. If you want to avoid being embarrassed by getting publicly busted and want keep your germs to yourself, your best bet is to just double dip off of your own plate. The moral of the story, enjoy the parties but resist the urge, don't be a double dipper! Good Luck...

Flex -Appeal is currently offering, for new customers, a 2 for 1 personal training special that allows you to get personally trained and bring a friend or spouse for FREE! Or Split The First Months Cost !!


But, hurry this offer ends Soon!