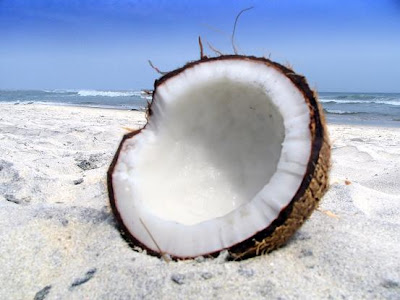 My quest to be more involved with coconut is on track.

Since writing about coconut last year, I've been trying to eat and use more coconut. You may be surprised to learn that the fat in coconut is not an artery clogging fat, but heart healthy fat that's very good for you. The coconut is a not a nut but a fruit. The tree is called a coconut palm. It belongs to the Arecaceae palm family and can grow 90 feet tall. It's called the "tree of life" in the Philippines, as all parts of the coconut tree have many uses in the islands, nothing is wasted. The delicious meat of the coconut fruit has many uses. It can be eaten as is, turned into candy or used for cooking and baking. The coconut water is a health drink that not only quenches your thirst but also cleanses the kidneys. Coconut water contains, antioxidants, electrolytes, sugars, protein, fiber, vitamins and minerals. The meat is also processed to become a cooking oil. 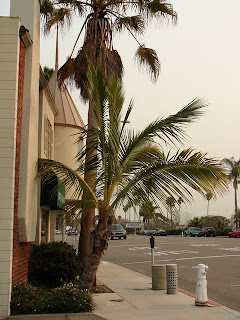 The oldest fossils known of the modern coconut date from the Eocene period from around 37 to 55 million years ago and were found in Australia and India. The coconut has spread across much of the tropics, probably aided in many cases by seafaring people. Coconut fruit in the wild is light, buoyant and highly water resistant, and evolved to disperse significant distances via marine currents. It has been collected from the sea as far north as Norway. In the U S the farthest north a coconut palm has been known to grow outdoors is a few miles from here in Newport Beach, California along the Pacific Coast Highway. Right across from Joe's Crab shack on PCH. (for all you locals) To survive here in Southern California, they need sandy soil and minimal water in the winter to prevent root rot. 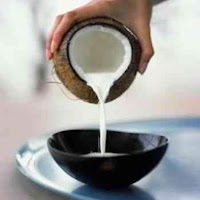 The edible "flesh" of the coconut, when it's dried is called copra. The oil and milk derived from it are commonly used in cooking and frying. Coconut oil is also widely used in soaps and cosmetics. Like most nut meats, coconut meat contains less sugar and more protein than popular fruits such as bananas, apples and oranges. Immature coconuts are more likely to contain more coconut water and less meat. This water is sweet. In the islands these unripe coconuts are given 3 or 4 swift swipes with a sharp machete and a straw is inserted and drank on the spot. When the coconut has ripened and the outer husk has turned brown, a few months later, it will fall from the palm on it's own. Now the meat has thickened and hardened, while the coconut water has become somewhat bitter. Coconut milk, comes from the flesh of the coconut, is high in saturated fat, it's a "good fat", one which can be easily metabolized by the body. It doesn't transform into "bad cholesterol" that can clog up the arteries. That's because the principle ingredient in coconut milk is the lauric acid, the same stuff found in breast milk, which promotes brain development and healthy bones. It's anti-carcinogenic, anti-microbial, anti-bacterial, and anti-viral. So it can strengthen your immune system and protect you from illnesses. You can make coconut milk fresh at home by pureeing the meat, or you can buy it canned or bottled at the supermarket. 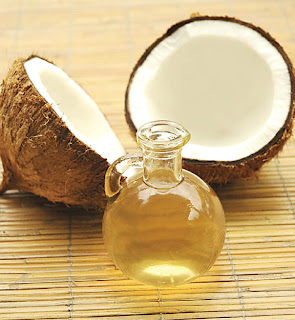 Long before cosmetics were invented, coconut oil was already busy giving countless people young-looking hair and skin. One of my favorite grandmothers died at age 91. Everyday she would massage coconut oil on her hair and scalp. She had the most beautiful long hair.You don't have to ingest it to reap its rewards. I apply coconut oil to my entire body after every shower, and the results are amazing. Coconut oil skin treatment penetrates your skin and reaches your bloodstream to yield more wonderful benefits for your health. One of the greatest coconut oil benefits, if not the greatest, is its ability to wipe out bacteria, fungi, viruses, parasites, yeasts, and worms. I've used it on my pet's, for ear and mouth infections, and it works as well as any drug store medication. Lauric acid, like I said before is the primary component in mother's milk that protects babies from infection. It is also the main antimicrobial MCFA in coconut oil. MCFA's are so potent, even the deadly AIDS virus (HIV) dies in their presence. So potent, yet so safe. The best reason to use coconut oil to cook with is the taste it adds to food. Virgin coconut oil has a deep coconut flavor that persists even after cooking, and the oil is very heart healthy. Or you can buy it filtered with no coconut taste. I use it often along with my other favorite grape seed oil. Coconut oil is a solid below about 70 degrees after that it liquifies. If you want to keep it solid keep it cool, and if you want oil put it on a sunny window ledge for a few minutes.

Check out some of the other harmful organisms destroyed by MCFA's in coconut oil:


Now let's talk about coconut water. It's a natural isotonic beverage. With the same level of electrolyte balance as we have in our blood. During WW II, it was siphoned from the fruit to give transfusions to wounded soldiers. it is naturally sterile because it is sealed inside the fruit. 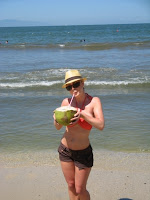 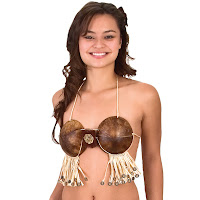 The left over fiber from coconut oil and coconut milk production, is used as livestock feed, or can be woven into rugs. A coconut can be hollowed out and used as a home by some animals like small birds. Halved, drained coconuts can also be hung up as bird feeders, or wind chimes. They can be used in the manufacture of swimwear. In Caribbean, I know that after the flesh has been removed, they can be cut in half add a straw and filled with rum to attract girls.
Believe it or not, coconut oil can be used as a substitute for diesel. Already, coconut oil mixed with petroleum diesel is being used, but new evidence shows that the coconut biodiesel can be used by itself in diesel engines without modification.

I think its naive to think that coconut water is the elixir we've all been waiting for. Still at the end of the day, coconut water is a reasonably nutritious, natural beverage that appears to have many health benefits. It doesn't replace fruits and vegetables, but if you just like the way it tastes, there's nothing wrong with including more in your diet as well. Just remember to account for the sugar and calories it provides. Also don't hesitate to use it topically for skin and hair. Finally, if you exercise hard or long enough to benefit from an electrolyte replacement drink, coconut water is the excellent alternative to sports drinks. Good Luck...

And If You Have A Tummy Ache... 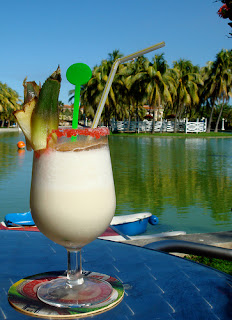 
My best recipe for a pina colada is:
* 1oz. pineapple rum
* 1oz. Parrot Bay 90 proof coconut rum
* 1oz. vanilla rum
* 2 ounces Cream of Coconut
* 2 ounces Pineapple Juice
* Crushed ice (enough to fill the serving glass).
Pour all of the ingredients into the blender and blend thoroughly until smooth. Pour back into your serving glass, top off with a straw and a piece of pineapple. Close your eyes and no matter what your weather just imagine this picture, enjoy!

Have A Great Weekend !!