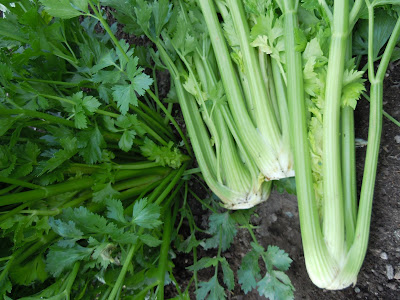 High in calcium and Vitamin C, celery should be a part of your daily diet.

It is an excellent finger food and best when eaten raw. Celery is believed to be originally from the Mediterranean basin. Ancient literature documents that celery, or a similar plant form, was cultivated for medicinal purposes before 850 B.C. Celery leaves and flowers were part of the garlands found in the tomb of Pharaoh Tutankhamen who died 1323 BC, and celery mericarps (seeded dried fruit) dated to the seventh century BC were recovered in the "Heraion of Samos."(sanctuary to the goddess Hera, in the southern region of Samos, Greece) Images of celery were even stamped on coins in ancient Greece from 515 to 470 BC. During ancient times physicians used celery seed to treat, colds, flu, water retention, poor digestion, various types of arthritis, liver and spleen ailments. Celery was considered a holy plant in the classical period of Greece and was worn by the winners of the Nemean Games, similar to the use of bay leaves at the Olympic Games.

The Romans valued celery more for cooking than for religion although much superstition was connected with it. Although celery is thought to be from the Mediterranean, indigenous "wild" relatives of celery are found in southern Sweden, the British Isles, Egypt, Algeria, India, China, New Zealand, California and southernmost portions of South America. Celery has made a surprising appearance in English football folklore. I can't find out why but supporters of English Premier League team Chelsea and Football League team Gillingham regularly sing songs about the vegetable and are famed for throwing celery during matches. This has also given rise to the "Chelsea Cocktail", a pint of Guinness garnished with a stick of celery. 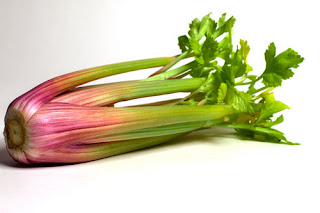 There are two types of stalk celery varieties, self-blanching or yellow, and green or Pascal celery. In North America green stalk celery is preferred and mainly eaten raw although it is also eaten cooked. In Europe and the rest of the world self-blanching varieties are preferred. Celeriac is very popular in Europe where it is eaten cooked or raw. Currently California harvests about 23,500 acres per year, year-round. Although it is available throughout the year, the best taste and quality of celery is during the summer months. Celery grows to a height of 12 to 16 inches and is composed of leaf-topped stalks arranged in a conical shape that are joined at a common base. It belongs to the same family whose other members include carrots, fennel, parsley and dill. Celery is is a very good source of vitamin C, which helps to support the immune system. Vitamin C-rich foods like celery may help severity of cold symptoms. Over 20 scientific studies have concluded that vitamin C is a cold-fighter. Vitamin C also prevents the free radical damage and reduces the severity of inflammatory conditions, such as asthma, osteoarthritis, and rheumatoid arthritis. As free radicals can oxidize cholesterol and lead to plaques that may cause heart attacks or stroke, vitamin C is beneficial to promoting cardiovascular health. 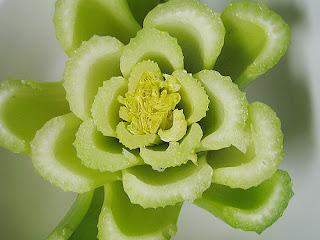 Celery's potential for reducing high blood pressure has long been recognized by Chinese medicine practitioners, and western science researchers may have recently identified one reason why. Celery contains active compounds called phthalides, which can help relax the muscles around arteries and allow those vessels to dilate. With more space inside the arteries, the blood can flow at a lower pressure. phthalides also reduce stress hormones, one of whose effects is to cause blood vessels to constrict. Celery can provide a sense of calmness.  People with gout should be fans of celery because it lowers uric acid. So the potential of celery in lowering blood pressure seems likely, and it doesn't hurt that celery ranks as a very good source of potassium and a good source of calcium and magnesium, either because increased intake of these minerals has also been associated with reduced blood pressure. Also celery contains compounds called coumarins that help prevent free radicals from damaging cells, thus decreasing the mutations that increase the potential for cells to become cancerous. Coumarins also enhance the activity of certain white blood cells, immune defenders that target and eliminate potentially harmful cells, including cancer cells. In addition, compounds in celery called acetylenics have been shown to stop the growth of tumor cells. Celery is an excellent source of vitamin K, dietary fiber, potassium, folate, vitamin A, vitamin C, molybdenum, and manganese. Celery is also a good source of calcium, vitamin B1, vitamin B2, vitamin B5, vitamin B6, and magnesium. Also how about the fact that celery was one of the original aphrodisiacs! Celery juice has been used for hundreds of years to treat impotency and enhance sexual functions. Guy's eating celery will get you noticed by the opposite sex. Researchers have found that after eating celery or drinking celery juice, men had higher levels of androsterone released through their sweat. Don't have a date for the weekend? Celery might just be your answer. 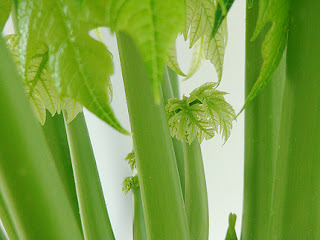 Choose celery that looks crisp and snaps easily when pulled apart. It should be relatively tight and compact and not have stalks that splay out. The leaves should be pale to bright green in color and free from yellow or brown patches. According to the Environmental Working Group's 2013 report "Shopper's Guide to Pesticides in Produce," celery is among the 12 foods on which pesticide residues have been most frequently found. So to avoid pesticide-associated health risks, Ithink you should avoid eating celery unless it is grown organically. Storing celery so that it stays crisp is very easy. You only need a few things:

Now celery has a great vitamin profile and has been used in many medicinal applications for centuries. It tastes great by itself dipped in organic peanut butter, egg salad, or guacamole dip. You could combine them with other veggies like cucumbers or sweet fruit in salads. Then there is my favorite way to eat celery and that's in a "Bloody Mary." However you like your celery, enjoy more of this ancient, nutritious veggie. Good Luck... 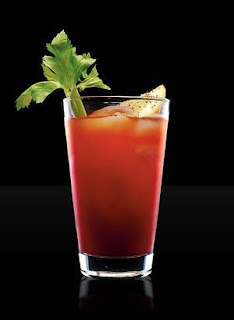 For Pure Clean Drinking Water any time, anywhere click one of the "Nourish A Life" banners on either side of this article at the top of the page, or doc.nourishalife.org and get your own water filtering bottle. Save the environment, save your health, "Nourish A Life"