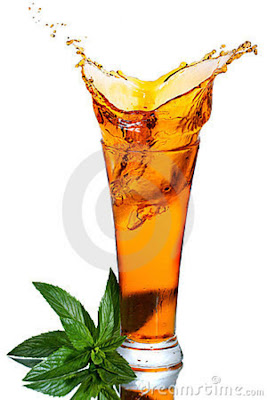 My friends and clients often ask me for a healthy alternative to water, and my answer has to be, is there anything more satisfying than a cold glass of iced tea on a hot summers day. Not only does it taste great, but iced tea has also been proven to help make our immune systems stronger, protect our teeth from plaque, and will help us to burn more calories. Tea is just as healthy for you cold as hot, and since it's summer I'm going to try and convince you just how delicious and healthy a tall glass of white peppermint ice tea can be. Unsweetened of course. For starters, white tea is full of more than 700 different chemicals, antioxidants, amino acids, and vitamins C, E, and K. Remember antioxidants help protect us against cell damage from free radicals. Antioxidants in white tea are called flavonoids, and they are also in vegetables and fruits. Eight ounces of iced tea, whether it is white, green or black, contains anywhere from 145 to 200 mg of these flavonoids. While green and black tea are very healthy, white tea is the least processed tea and has the highest antioxidant levels, and the darker the tea the more it will stain your teeth. First a little history:

The history of green tea started in China and the origin is surrounded by myths and legends. One of the earliest stories was dated as far back as 5000 years ago. White tea became revered during China's Song Dynasty (960-1279). It was the choice of the royal court and was given as tribute to the emperor. White tea leaves and buds were ground into a silvery powder, which was then whisked in bowls during the Song Tea Ceremony. This was the inspiration for the famous Japanese Tea Ceremony. It was only after the fall of the Mongolian empire, that tea drinking spread to the whole population of China. During the time when China was dominating the sea, tea was part of the provisions given to the sailors. In time, tea made it's way to Japan. It was the Japanese that developed new variations of tea. The history of tea continued when a Portuguese missionary introduced it to European counties. After that, the Dutch East India Company launched the trade of tea by shipping it from China to Europe. 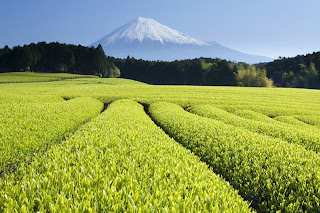 Guess what, black tea, green tea, oolong tea, white tea and yellow tea, all come from the same evergreen plant Camelia Sinensis. The differences lie in how each tea is processed. The tea leaves oxidize and wilt if not dried quickly after picking. As the chlorophyll in the leaves break down, the leaves progressively darken. This process of enzymatic oxidation is called fermentation in the tea industry, even though in reality this is not fermentation. That is, no micro-organism is added to ferment the tea. It goes like this, White tea is unwilted and unoxidized by picking and air drying; Yellow tea is unwilted and unoxidized but allowed to yellow; Green tea is wilted and unoxidized, picked, then heated, by steaming or pan frying, then drying the leaves; Oolong tea is wilted, bruised, and partially oxidized; Black tea is wilted, crushed, and fully oxidized. Now, besides caffeine, white tea also contains catechin polyphenols that raise thermogenesis (rate calories are burned), that will increase your energy, endurance, and fat burning. The University of Geneva and the University of Birmingham conducted clinical trials indicating white tea raises metabolic rates, speeds up fat oxidation and improves insulin sensitivity and glucose balance. City College of the University of New York, found that the amino acid L-theanine, found exclusively in the tea plant, is absorbed by the small intestine and crosses the blood-brain barrier affecting the brain's neurotransmitters boosting mental alertness by increasing alpha brain-wave activity, and resulting in a calmer, more alert state of mind. The Mayo Clinic Health Letter says, "tea could be beneficial in reducing inflammation related to arthritis and slowing cartilage breakdown. It may also improve bone mineral density in older women". "Those who consume white tea daily show less risk of memory loss. The potential benefits seem to be in the tea cup and not in supplements or tea extract capsules." A 2004 study at Pace University revealed that white tea extract may help slow viruses and bacterial growth, thus reducing the incidence of staphylococcus and streptococcus infections, pneumonia, fungus growth, and even dental plaque. An article published by scientists from the Linus Pauling Institute at Oregon State University found that consumption of moderate amounts of white tea may hedge against colon tumors consistent with the prescription drug, sulindac. When used in combination with the drug, the results were more effective. A study at Kingston University in 2009 showed that white tea has high anti-inflammatory, antioxidant, anti-collagenase, and anti-elastase properties which could potentially reduce the risks of developing rheumatoid arthritis, some cancers, heart disease and slow the enzymatic break-down of elastin and collagen, traits which accompany aging. 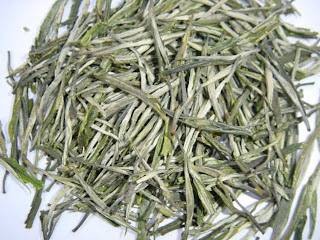 As I said white tea comes from the buds and leaves of the Chinese Camellia sinensis plant. The leaves and buds are allowed to wither in natural sunlight. The name "white tea" originates from the fine silvery-white hairs on the unopened buds of the tea plant, which gives the plant a whitish appearance. The beverage itself is not white or colorless it's pale yellow. The secret of white tea lies in the fact it is rich in catechin polyphenols, particularly EGCG (epigallocatechin gallate). EGCG is a powerful anti-oxidant, besides inhibiting the growth of cancer cells, it kills cancer cells without harming healthy tissue. White tea is even proven to help prevent tooth decay. Just as it's bacteria destroying abilities can help prevent food poisoning, it can also kill the bacteria that causes dental plaque. White tea contains less caffeine than coffee. There are approximately 30-60mg. of caffeine in six to eight ounces of tea, compared to over 100 mg. in eight ounces of coffee. Scientists from Purdue University recently reported that tea reduced mercury absorption by as much as 92% when ingested with mercury-contaminated mackerel. This is a big deal because even small amounts of mercury can damage your heart, blood vessels and central nervous system. So the next time you knock back some sushi, tuna or swordfish pass on the saki and order the tea. 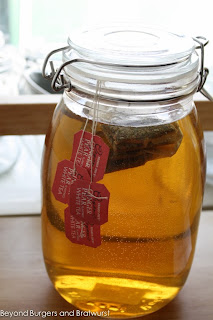 Now take it from me the best way to make ice tea is to start with a gallon jar and the sun. I use white organic peppermint tea, 4 bags per. gallon. Now if you can't find white peppermint tea go buy a peppermint plant form the nursery they're cheep, not mint. Mint is great for Mojitos but I think peppermint tastes better in tea. If you don't like peppermint try slices of pear or cinnamon the possibilities are endless. Let your white tea sit out all day in the sun and refrigerate after the sun sets. It's that easy. Always use organic white in unbleached bags, or loose white in a tea ball. China's Fujian province, is the heartland of white tea so read your labels. If you use fruits or peppermint for added flavor you'll never need sweetener, but if you just can't drink tea that isn't sweet, then use Stevia or Xyliotl both are natural and won't raise your blood glucose level enough to demand an insulin response. Stay away from the canned and bottled teas, don't think you can get all of the goodness of tea from drinking the chilled canned and bottled selections from your closest convenience store's cooler. In order to receive the benefits from iced tea, you must make sure to drink freshly brewed organic iced tea . The cans of tea in the supermarket are lined with BPA and they have preservatives (salts) in them to extend shelf life and HFC"s (High Fructose Corn Syrup) sucralouse or sugar. Most likely they aren't organic which means pesticides, herbicides or GMO's. Which defeats the purpose of the healthy drink. So this summer give some white iced tea a try you'll be glad you did. Good Luck...