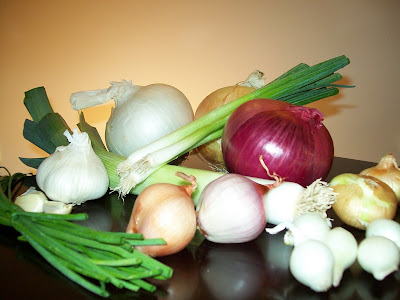 How in the hell did primitive man find out these tear jerking vegetables were edible? Seriously...


Somewhere primitive man at the dawn of time, hungry, decided to ignore the leaves and flowers above ground, and instead dug into the soil. Where he found a purple bulbous root, with tough, dry skin and amazingly took a bite. He would have tasted the bitter sweetness, and then felt his eyes and nose start to leak. When he didn't die hours later, he must have reasoned "Hey, new spicy food," They ate it, and shared their find. Today we owe a majority of the flavor, in every cuisine, on the four corners of our earth to onions. 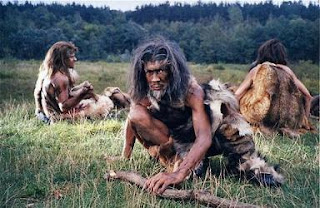 So how about a little history. The Egyptians left onions in their tombs about 3,500 years ago. Paintings of onions appear on the inner walls of the pyramid of Unas, 2423 B.C. There is evidence that the Sumerians were cultivating onions as early as 2500 B.C. Food historian, Waverly Root, cites a Sumerian text dated to about 2400 B.C. that tells of someone, "plowing the city governor's onion plot." Texts from India dated to the early 6 th century, write of the onion's use as medicine. They were used as a diuretic, and taken for the heart, the eyes, and the joints. In ancient Greece, athletes ate large quantities of onion because it was believed to help the circulation of blood. Roman gladiators were rubbed down with onion to firm up their muscles. In the Middle Ages, onions were such an important food that people would pay their rent with onions, and even give them as gifts. Doctors were known to prescribe onions to help with constipation and erections, headaches, coughs, snakebite and to this day hair loss. Native Americans used wild onions in a number of ways, eating them raw or cooked in a variety of foods. They also used them to make into syrups, to form poultices and in the preparation of dyes. According to diaries kept by the colonists, bulb onions were one of the first things planted by the Pilgrim Fathers when they cleared the land for cropping in 1648. 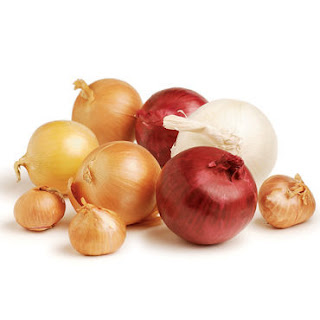 Common onions are normally available in three colors; yellow, red, and white. Yellow onions are full-flavored and are a reliable standby for cooking almost anything. Yellow onions turn a rich, dark brown when cooked and give French onion soup its tangy sweet flavor. The Red onion is a good choice for fresh uses or in grilling and char-broiling. White onions are the traditional onion used in classic Mexican cuisine. They have a golden color and sweet flavor when sautéed.
While the large mature onion bulb is the onion most often eaten, onions can be eaten at immature stages. Young plants may be harvested before bulbing occurs and used whole as scallions. Now as far as a good cry goes, among all varieties, Asian white onions have the most eye irritating chemical reaction. Now, for all varieties of onions, the more phenols and flavonoids they contain, the more reputed antioxidant and anti-cancer protection they provide. Shallots have the most phenols, six times the amount found in Vidalia onion, the variety with the lowest phenolic content. Shallots also have the most antioxidant activity, followed by Western Yellow, Northern Red, Mexico, Empire Sweet, Western White, Peruvian Sweet, Texas 1015, Imperial Valley Sweet, and Vidalia. Western Yellow onions have the most flavonoids, eleven times the amount found in Western White, the variety with the lowest flavonoid content. When tested against liver and colon cancer cells in laboratory studies, Western Yellow, and shallots were most effective in inhibiting their growth. The total polyphenol content of onions is much higher than many people expect. Polyphenols are one of the largest categories of phytonutrients in food. The total polyphenol content of onion is not only higher than its fellow vegetables, garlic and leeks, but also higher than tomatoes, carrots, and red bell pepper. Unlike the research on garlic and its cardiovascular benefits, research specifically focused on onion has mostly been conducted on animals rather than humans. 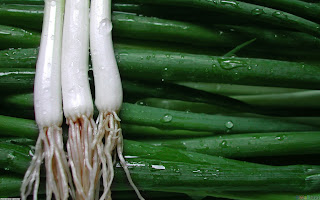 In animal studies, there is evidence that onion's sulfur compounds may work in an anti-clotting capacity and help prevent the unwanted clumping together of blood platelet cells. There is also evidence showing that sulfur compounds in onion can lower blood levels of cholesterol and triglycerides, and also improve cell membrane function in red blood cells.
While members of the onion family appear to have medicinal properties for humans, they can be deadly for dogs and cats. The toxicity is caused by the sulfoxides present in raw and cooked onions which many animals are unable to digest. Scallions also known as green onions, spring onions, salad onions, have hollow green leaves and lacking a fully developed root bulb. They are milder than most onions. They may be cooked or used raw as a part of salads or Asian recipes. Scallions bulbs and green tops are used in soup, noodle and seafood dishes. Cooking onions and sweet onions are better stored at room temperature, optimally in a single layer, in mesh bag in a dry, cool, dark, well-ventilated location. In this environment, cooking onions have a shelf life of three to four weeks and sweet onions one to two weeks. Irrespective of type, any cut pieces of onion are best tightly wrapped, stored away from other produce, and used within two to three days. 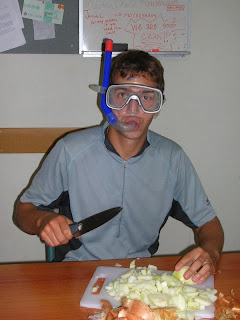 Now about those tears, when you slice an onion, cells are broken, allowing enzymes to break down and generate sulphenic acids. That forms a volatile gas known as the onion lachrymatory factor or LF. The LF gas diffuses through the air and eventually reaches the eye, where it activates sensory neurons, creating a stinging sensation. Your tear glands will make you cry to dilute and flush out the irritant. Chemicals that exhibit such an effect on the eyes are known as lachrymatory agents. Like pepper spray. One way to reduce the tears is by chilling them, or by not cutting off the root of the onion,or doing it last, because the root of the onion has a higher concentration of gas producing enzymes. Using a sharp blade to chop onions will limit the cell damage and the release of enzymes also. My secret, if I'm going to chop a bunch, is one of those little battery operated fans from the dollar store, and the tears are "no problem mon!" Of course a snorkel and scuba mask will work also. Those GMO rascals, Monsanto Seed Company this summer, unveiled a tearless onion that it's dubbed the "EverMild," modeled after the famous Vidalia sweet onion from Georgia. Monsanto claims the onion is neither organic nor genetically modified, and it took more than twelve years of cross-pollinating different plant breeds, and complex computer models, to arrive at the right proprietary blend of sweetness. You can believe that if you want to, Monsanto can kiss my ass. 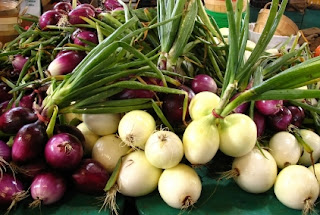 The flavonoids (anti-oxidents) in onions tends to be more concentrated in the outer layers of the flesh. So to maximize your health benefits, peel off as little of the fleshy, edible portion as possible when removing the onion's outermost paper layer. Even a small amount of "overpeeling" can result in unwanted loss of flavonoids. Onions are also a good source of immune-supportive vitamin C, blood-sugar-balancing chromium, and heart-healthy dietary fiber. They are also a good source of enzyme-activating manganese and molybdenum, heart-healthy vitamin B6, folate, and potassium, energy-producing phosphorus, and bone-supportive copper. Onions are low in calories, with one cup having only 60 calories. What would the kitchen be without the pungent aroma of the cooking onion. Weather they're raw on burgers and hot dogs simered in onion soup , battered and deep fried, or stir fried into some Asian dish. Onions have been adding just the right touch of flavor to our foods since aincent times and adding a few more to our diet couldn't hurt. Good Luck...