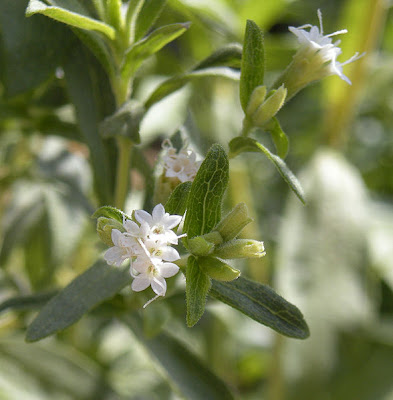 Stevia is a genus of about 240 species of herbs and shrubs in the sunflower family.


Stevia native to subtropical and tropical regions from western North America to South America. The species Stevia Rebaudiana, commonly known as, sweet leaf, sugarleaf, or simply Stevia, is widely grown for its sweet leaves. The Guarani Indians of modern-day Paraguay have used leaves of the Stevia shrub since ancient times. They called Stevia the "sweet herb" or "honey leaf" in their dialect and used it to sweeten bitter forms of tea and medicinal potions for many centuries before its use spread to surrounding areas. The Spanish Conquistadors in South America learned about Stevia's properties from the Guarani and Mato Grosso Indian tribes in the early 1500's. By the 1800's, when Europeans began taking more interest in Stevia, its daily use was common among other indigenous peoples in the regions of Brazil, Argentina, Mexico and the southwestern United States. Stevia species were first researched by Spanish botanist and physician Pedro Jaime Esteve, whose surname was Latinized to form the word, Stevia, which became the genus name for the plants he studied. In 1899, Swiss botanist Moisés Bertoni went to Paraguay and studied the Stevia species, especially Stevia Rebaudiana, and wrote detailed accounts of its sweetness and uses among indigenous peoples. In 1931, French researchers isolated the glycosides that give Stevia its sweet properties and named them stevioside and rebaudioside. By the early 1970's, Japan became the first country to cultivate and market Stevia as an alternative to refined sugar and artificial sweeteners. Stevia is now widely used in China, Southeast Asia and parts of South America.In the U.S. Stevia was approved as a dietary supplement since 1995. In 2009, the FDA approved Rebiana, an active component of Stevia, as a food additive at the urging of the likes of Coca Cola, who owns Truvia.( a unnatural stevia product) and Pepsi, who owns Purevia. (also a unnatural stevia product) Stevia itself is not approved for use in packaged foods. As a sweetener and sugar substitute, stevia's taste has a slower onset and longer duration than table sugar, although some of it's extracts may have a bitter or licorice-like aftertaste at high concentrations. Stevia is the new low-calorie sweetener on the block and everyone is talking about it. So, what is Stevia and is it healthier than sugar, and safer than artificial sweeteners? Can you eat it and not gain weight? Good questions, here's what you need to know. Lately you may have seen TV commercials claiming Stevia to be all-natural and not artificial like other low-calorie sweeteners. Well, this in fact is true. Stevia itself is a small perennial shrub that habitats areas of the southwestern United States to the Brazilian Highlands. 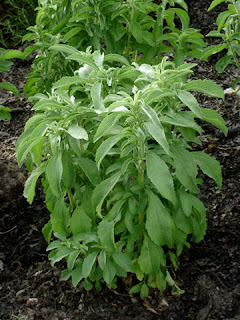 It's a semi-humid subtropical plant that can be grown easily like most other vegetables, even in the kitchen garden. The leaves of wild Stevia plants contain several different natural glycoside compounds including dulcoside A & B, rebaudiosides A-E, steviolbioside and stevioside – these are the compounds responsible for producing the sweet taste sensation. Other chemicals with no sweet taste are also found in Stevia species and some even taste bitter. The sweet Stevia extract is similar to other non-nutritive sweeteners, such as sucralose, in that it has zero calories, is 200-300 times sweeter than table sugar, is non-fermentable, and does not contribute to dental plaque.
Compared to 1 teaspoon of sugar, you would only have to use 1/8 teaspoon, or less of Stevia leaf extract powder to get the same sweet taste. I'm not kidding on this one I made the mistake of over using while taste testing for this article. Similarly, for 1 cup of sugar, you would only need 2 tablespoons of Stevia.

Some people experience a bitter aftertaste when consuming products with Stevia sweetener in them. This bitter taste is due to the presence of essential oils, tannins and flavonoids which are similar to the compounds that make tea and coffee bitter, but give them their therapeutic potentials. Stevioside and Rebaudioside A ( Reb A) are partially responsible for the aftertaste, with Reb A contributing less than Stevioside. Reb A is usually the Stevia extract you will find on store shelves. Due to this bitter taste, many Stevia leaf products on the market today also contain other lower-calorie sweeteners (like erythritol and maltodextrin) to cut out some of this not-so-pleasant taste. These added agents also prevent caking of Stevia, because alone it tends to be very water-loving and will clump. Stevia in it's raw form, although incredibly sweet, has a very subtle liquorice essence to it. A sign of an excellent Stevia product is one that is free of this liquorice essence and still not bitter, 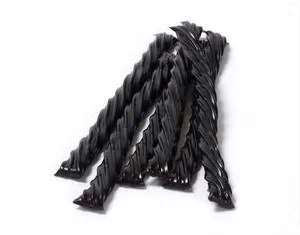 In Japan, artificial sweeteners were banned some 40 years ago, so Stevia has been chosen mostly to sweeten their food and beverages. The Japanese have performed over 40,000 clinical studies and found Stevia to be safe. Stevia is suited for both diabetics and people with phenylketornuria (PKU), and no allergic reactions seem to exist. It's also been tested in person's with hyper-cholesterolemia. 20 women were given a 20 ml. extract of Stevia in water and in response their levels of total cholesterol, triglycerides and LDL were reduced, while HDL was increased (Sharma & Morge, 2007). Therefore, the effects of Stevia are more desirable than table sugar which increases blood triglycerides and can often lower HDL (good cholesterol). In more recent years, the effects of non-nutritive sweeteners such as Aspartame (Nutra Sweet) and Sucralose (Splenda) have been under question. Some studies indicate that it paradoxically stimulates appetite and causes even more desires for sweetness (Blundell & Hill, 1986). In a recent investigation (Anton et al, 2010), Stevia was compared against aspartame and sucrose (table sugar) for its effects on blood glucose, insulin, satiety and food intake in 19 lean and 12 obese, non-diabetic men and women.

The participants were all fed the same breakfast on three separate days, followed by a pre-lunch and dinner meal of tea, crackers and cream cheese sweetened with either Stevia extract, aspartame, or sucrose. 20 minutes after their pre-meal, they were given lunch or dinner and their satiety and food intake was measured. Glucose and insulin were measured after all meals and pre-meals. The results showed that Stevia and aspartame had similar effects on satiety and hunger compared to sucrose. Participants did not eat more calories at lunch or dinner following the Stevia meal compared to the sucrose meal, even though it contained less total calories. More interestingly, it was shown that glucose levels after the meals were significantly lower in the Stevia groups, compared to the sucrose group, and lower than the aspartame group. Insulin levels were also significantly lower for the Stevia group, compared to both the sucrose and aspartame group. These effects on insulin and glucose have beneficial long term applications for body weight management and blood sugar control. Insulin is a storage hormone and will drive unused glucose (sugar) into fat cells, keeping it lower. With Stevia, we won't increase body fat compared to eating something that increases insulin and glucose more, like sugar. This also shows that Stevia may help to manage post-meal hyperglycemia, which is an important contributor to the development of insulin resistance and Type 2 diabetes.

When it comes to sweeteners, Stevia does have benefits over others. Stevia has a long line of safety data to back up its use and it doesn't pose any added risks for diabetes and insulin resistance possibly like some other sweeteners.

However, we all use too much sugar and sweetness in our foods as it is. From breads to jams to juice to tea, any packaged  foods we often eat are already loaded with excessive sweetness. If you don't really need an added sweetener in your foods, just pass them up and enjoy the taste of the food the way that it is. But, if you do enjoy a sweet addition to foods like protein smoothies or yogurt. Good Luck..


But, hurry fast, this offer is only good until the end of March.