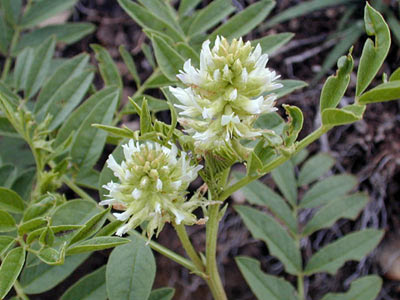 Since we are moving into the candy season I thought we'd look at the benefits of one of my favorites, Licorice, even though I'm sure my dental crowns are never happy to see it coming their way. 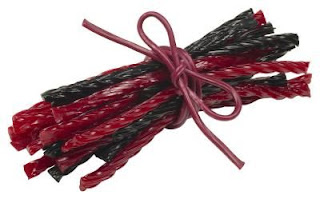 Licorice, comes from the root of Glycyrrhiza glabra plant, and is the flavor we call black licorice, it flavors liqueurs such as Jagermeister, and medicines such as NyQuil. The licorice plant is native to southern central Europe and Asia. The stems, or rhizomes, and root of the plant have been traditionally used in candies, teas and medications since ancient times.
Licorice root powder, most common use is to treat coughs and colds, but also great for chronic fatigue, gastric and duodenal ulcers and canker sores. Abdominal pain, heart tonic, inflammation, muscle spasms, bronchitis all benefit from licorice. It's also said to improve complexion, hair and vision. 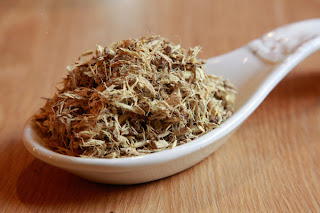 Licorice root is one of the most widely used medicinal herbs worldwide and is the single most used herb in Chinese medicine today. It was used by the Egyptians as a flavoring for a drink called Mai-sus, and large quantities were found in the tomb of King Tut for his trip into the afterlife. Pliny the Elder recommended it to clear the voice and alleviate thirst and hunger. Dioscides, when traveling with Alexander the Great, recommended that his troops carry and use licorice to help with stamina for long marches, as well as for thirst in areas of drought. In the Middle Ages it was taken to alleviate the negative effects of highly spicy food or overcooked food. It was also used for flavoring tobacco, and as a foaming agent in fire extinguishers and beer. In a recent survey of Western medical herbalists, licorice ranked as the 10th most important herb used in clinical practice. An astonishing number Chinese herbal formulas (over 5,000) use licorice to sweeten teas and to "harmonize" contrasting herbs. Its first documented use dates back the time of the great Chinese herbal master Zhang Zhong Zhing, about 190 AD, but it was certainly used for many centuries prior to this. Licorice is imported mostly from Spain and Italy, but cultivation has existed on a small scale in England. Dominican friars introduced licorice to England by bringing it to Yorkshire Dales around the 15th century, where it became famous as an ingredient in Pontefract cakes. According to the book "Turner's Herbal" the planting and growing of licorice in England began about the first year of Queen Elizabeth, which was in 1558. Licorice water (tea) was very popular for Southern Europeans. They drank large amounts because they believed it was a blood purifier.

It was the English who introduced the herb to the American Indians, which is strange because it was usually the other way around. John Josselyn of Boston in the sixteenth century lists Licorice as one of the "precious herbs" he brought over from England. He would brew a beer for the Indians when they had a bad cold. It was strongly flavored with elecampane, a combination of, licorice, aniseed, sassafras and fennel. The most common use of licorice world-wide is to treat coughs and colds. Licorice is especially useful for treating coughs with sticky phlegm, or for treating colds that accompany stomach upset. Chinese medicine also uses licorice to treat various forms of chronic fatigue. Gastric and duodenal ulcers and canker sores can be treated with the herb or with its common derivative, deglycyrrhizinated licorice (DGL). If you use DGL, however, you must remember to chew the capsules or they will not work. Saliva activates DGL. According to the Licorice Root Extract Research website:


Licorice Root Extract is being studied for its anti-viral effects. In laboratory studies using cells, hen eggs and animals it has a protective effect against:

A Japanese study reported in the August 2009 issue of "Obesity Research and Clinical Practice" found that subjects taking 300, 600 or 900 mg daily doses of licorice flavonoid oil over eight weeks lost more body fat than those taking placebo. Subjects taking 900 mg per day also had significant decreases in body weight, low-density lipoprotein, the "bad" cholesterol and visceral fat. A 1979 animal study published in the "Scandinavian Journal of Gastroenterology" showed a decrease in ulcer in rats given DGL with aspirin.
According to Web MD a new study in the Journal of Natural Products, licorice root may help keep teeth healthy. The authors report that compounds found in the dried root of the licorice plant may help prevent and treat tooth decay and gum disease.
So maybe you like it for it's health benefits or just the distinct pleasurable taste. If you don't fall into one of the precaution groups below and your doctor says it's ok, why not get reaquainted with real licorice, or try some root for your health this candy season. Good Luck...


Precautions:
Don't use licorice if you have high blood pressure. Your body needs potassium from fruit and vegetables to compensate for the excretion of potassium stimulated by licorice. If you use steroids or an asthma inhaler, licorice will increase both the effectiveness of the drug and the severity of its side effects. It's long term use is not often recommended, and it is not recommended for use by pregnant women. May cause stomach upset if taken in large quantities.


Flex-Appeal Personal Training , (publisher of Doc's Fitness Tip's) Is Located In Dana Point, Ca. Also serving The Communities Of, San Juan Capistrano, San Clemente, Laguna Beach Laguna Niguel, Laguna Hills Aliso Viejo, And Mission Viejo. Is offering a 2 for 1, first month special if you book an exercise training program before the end of the month! Train with a friend for FREE!!

OR Split The First Months Cost !! Call - (949) 443-0133 For Details.
OR TRY A NO COST INTRODUCTORY PERSONAL TRAINING WORKOUT OR DIET CONSULTATION, BY PHONE, SKYPE, OR IN PERSON.