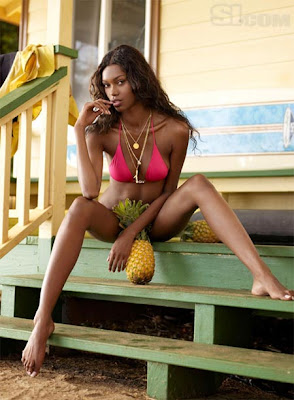 Is there anything more satisfying than a cool, juicy pineapple on a hot day?

Now I can see where some of my readers would think that, the only reason I'm gratuitously reposting this article is because I like the model (and her pineapple) and I gotta be honest you'd be 100% right! So let's see the plant is indigenous to South America, it originates between Southern Brazil and Paraguay. The natives of southern Brazil and Paraguay spread the pineapple throughout South America, and where it eventually reached the Caribbean. Columbus discovered it in 1493 on tthe island of Guadalupe, and brought it back with him to Europe. When European explorers discovered this tropical fruit, they called them pineapples because of their resemblance to  the pine cone. The Spanish are also credited with introducing the fruit into the Philippines, Zimbabwe, Guam and Hawaii in the early 19th century, which spawned the first commercial plantation 1886. The fruit was cultivated successfully in European hothouses, beginning around 1720. Since pineapples are very perishable, and modes of transportation to bring them to America from the Caribbean Islands were relatively slow centuries ago, fresh pineapples were a rarity that became coveted by the early American colonists. While glazed, sugar-coated pineapples were a luxurious treat, it was the fresh pineapple itself that became the sought after true symbol of prestige and social class. 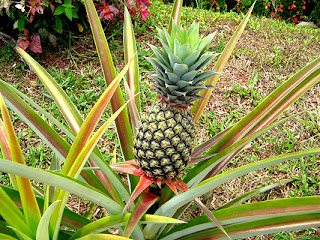 Although it was discovered by Captain Cook, John Kidwell is credited with the introduction of the pineapple industry in Hawaii. Large scale pineapple cultivation by U.S. companies began in the early 1900's on Hawaii. The most famous and influential pineapple industrialist was James Dole, who moved to Hawaii in 1899 and started a pineapple plantation in the year 1900. Since about 2000, the most common fresh pineapple fruit found in U.S. and European supermarkets is a low-acid hybrid that was developed in Hawaii in the early 1970's.

When creating its fruit, it usually produces up to 200 flowers, once it flowers, the individual fruits of the flowers join together to create what is commonly referred to as a pineapple. A pineapple will never become any riper than it was the minute it was picked. FYI, fully ripe pineapple can bruise and rot quickly. A plant growth regulator Ethephon is typically sprayed onto the fruit one week before harvest, developing ethylene, which turns the fruit golden yellow. The area closer to the base of the fruit has more sugar content and therefore a sweeter taste and more tender texture. If it is stored at room temperature, it should be used within two days, however, if it is refrigerated, the time span is extended to five to seven days.

The variety cultivated on Hawaii is the smooth cayenne, which is found in supermarkets, in fresh and canned form. The pineapple is grouped into four main classes with numerous varieties in each class.
Smooth Cayenne
The smooth cayenne pineapple is by far the most popular of all the varieties due to its low fiber content, rich taste, juiciness and low acidic content. It has a yellow interior and orange exterior and is largely used for canned pineapple. It is named smooth cayenne due to its origin in Cayenne, French Guyana, and because it has a smooth skin with virtually no protruding spines.

Abacaxi
Abacaxi is the Portuguese word for pineapple. The abacaxi, also known as the pernambuco pineapple -- is the common variety of Brazil. The fruit varies widely in weight from 2.2 to 11 lbs., and is very disease resistant, with a spiny exterior. The fruit typically has a small core, with white or very pale yellow flesh and is considered one of the more delicious varieties. The abacaxi tends to be too tender for commercial shipping and handling.

Red Spanish
The red Spanish pineapple is the most popular variety among the West Indies, primarily grown in Puerto Rico. It has a spiny, red-orange exterior, ranges from 3 to 6 lbs., with pale, yellow fruit. The red Spanish handles shipping very well and is resistant to fruit rot.

Queen
The queen pineapple is cultivated in South Africa, Australia and the Philippines. It is a smaller, more compact variety which ranges in weight from 1 to 2 1/2 lbs. It is a cold- and disease-resistant variety with deep yellow flesh and a conical shape. The fruit is juicy and fragrant with little fiber. 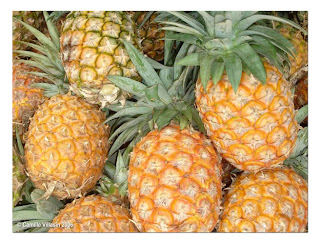 Pineapple is an excellent source the trace mineral manganese, which is an essential cofactor in a number of enzymes important in energy production and antioxidant defenses. For example, the key oxidative enzyme superoxide- dismutase, which disarms free radicals produced within the mitochondria, the energy production factories within our cells. Just one cup of fresh pineapple supplies 128.0% of the Daily Value (DV) for this very important trace mineral. In addition to manganese, pineapple is a good source of thiamin, a B vitamin that acts as a co-factor in enzymatic reactions central to energy production. The fruit also has digestion-related and anti-inflammatory benefits, and we should know by now, that anything we eat, that reduces inflammation is good for us. The Archives of Ophthalmology indicates that eating 3 or more servings of the fruit per day may lower your risk of age-related macular degeneration (ARMD). This is a dreadful disease where the patient slowly goes blind. Hey, add fresh pineapple to your morning smoothie, lunch time yogurt, any vegetable salad.

Pineapples grown in Costa Rica, where pineapple production is highly industrialized, it is typical to use 20 kg. of pesticides per hectare in each growing cycle, a process that is suspected of affecting soil quality and biodiversity. The pesticides, organophosphates, organochlorines and hormone disruptor's, have potential to affect worker's health and can contaminate local drinking water supplies. Many of these chemicals have potential to be carcinogenic and may be related to birth defects. So ask your produce guy where your pineapples come from.

So they're high in vitamins and minerals, especially in calcium, vitamin C, potassium, fiber, and manganese. Tasty, sweet, healthy and sexy, and you couldn't make a pina coloda without them!! I have 3 plants in my yard. Try a little fresh pineapple this week and listen to your body say thank you. Good Luck...

Flex-Appeal Personal Training (publisher of Doc's Fitness Tip's) is offering a 2 for 1, first month special if you book an exercise training program before the end of the month! Train with a friend for FREE!!

OR TRY A NO COST INTRODUCTORY WORKOUT OR DIET CONSULTATION, BY PHONE, SKYPE, OR IN PERSON. PLEASE CONTACT ME DOC MASTERS AT flexappealdoc@hotmail.com