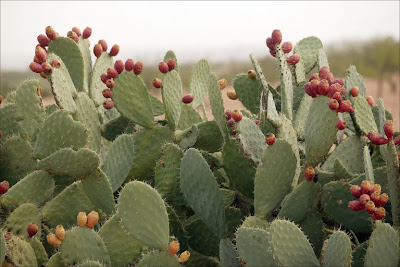 This time of year, when magenta colored fruits begin to replace yellow blossoms as accents to the cactus green pads. Even though you see them in Israel, it is not native to that part of the world. It is native to the southwestern United States down through much of Mexico. It was spread to the hot and dry parts of the world during the colonial age. On its home turf, the plant was really important to ancient Native American cultures. Aztec legend has it that Aztec civilization started at the foot of Prickly pear cactus stand. The story goes that a group of Aztec men saw an Eagle perched in a Prickly Pair cactus with a snake in its beak. The eagle had overcome the snake. They took this as an Omen that they too would overcome their adversaries and in reverence for the vision, they built their capital on the site of the vision. The prickly pear fruit (known as tuna in Spanish) is a rich source of the mineral magnesium and the amino acid taurine, nutrients often cited as important to brain and heart health. Prickly pear cactus is a rich source of flavanoids, including kaempferol, quercetin, kaempferol 3-methyl ether, quercetin 3-methyl ether, narcissin, dihydrokaempferol (aromadendrin, 6), dihydroquercetin, and eriodictyol. These flavanoids are responsible for its health-enhancing benefits. Traditional Mexican indian tribes have used prickly pear cactus as a food item and a medicinal plant. Mexico has a hot, arid, desert climate, and this makes agriculture difficult in the absence of irrigation technologies. Out of necessity and in the absence of other plant life, prickly pear cactus was used as a food item by Mexican Indian tribes. It has been used to make jellies, soups, pickles, and even cheese products. Medicinally, prickly pear cactus has been used to heal superficial wounds, like cuts and scrapes. Like AloeVera, it is usually applied topically. 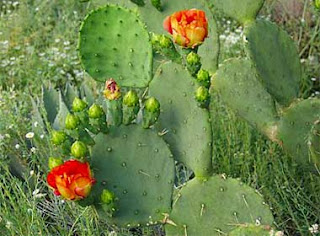 Modern science has discovered the many health benefits of prickly pear cactus. Studies show that in addition to being able to heal minor cuts and wounds, prickly pear cactus can protect the immune system and prevent oxidative stress by acting as a scavenger of free radicals. It's antioxidant action will protect cells, and organs, slow the aging process, and help prevent disease.  In recent studies the scientific community has validated these traditional uses of the pear. As an example, a prickly pear extract was found to be a powerful anti-inflammatory. In tests with rats, the extract inhibited experimentally induced joint inflammation. Researchers found that this anti-inflammatory effect was at least partly due to a potent inhibition of white blood cell migration into sites of inflammation and the suppression of white blood cell release of inflammation causing compounds. A prickly pear extract was found to inhibit chronic joint inflammation in a study using mice and to significantly increase wound healing in rats.  So it seems the Aztecs, the Spanish missionaries, and the cowboys alike were smart to use various parts of the prickly pear to cure both chronic joint problems and out on the range accidents. A French research scientist, Gilles Gutierrez, believes that prickly pear is much more than a remedy for arthritic joints and thrown out backs. He feels it is the ideal supplement for anyone leading an active life. At his institute in Malta, Gutierrez established that professional athletes were able to go longer and harder while using a prickly pear extract. Even more importantly, they recovered from strenuous exercise more rapidly when taking the pear. According to Gutierrez, the key to this action is prickly pears ability to stimulate the production of the bodies’ natural restorative compounds. During stressful exercise the body produces compounds known as heat shock proteins. These compounds help the body heal itself after a work out. The researcher has established that the body synthesizes more heat shock proteins when dosed with his prickly pear extract. So to power up a workout and speed recovery from that work out, take regular doses of prickly pear extract. 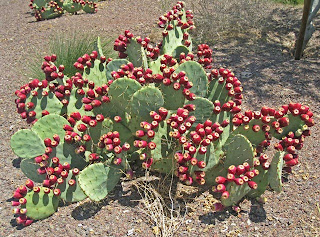 Additionally, prickly pear cactus can lower LDL (low density lipoprotein) cholesterol levels, and this will help lower blood pressure and the workload placed upon the heart. The
anti-inflammatory effects of prickly pear cactus are also well known. Ancient Mexican indian tribes used prickly pear cactus to sooth inflamed insect bites, and Western science has discovered that prickly pear cactus is useful in the treatment of arthritis and inflammation of the eyes, muscles and joints. Not surprisingly, recently athletes have turned to prickly pear cactus to get more energy in the gym, to reduce post-exercise muscle soreness, to speed recovery and to reduce the chances of getting DOMS (delayed onset muscle soreness). Prickly pear extract has proven remarkably useful as an ergogenic recovery aide. In addition to its effects on exercise and recovery, prickly pear cactus has shown promise as a diabetes treatment. Clinical trials have shown that it helps stabilize blood sugar levels, and is effective for the treatment of type-2 diabetes. The effects of prickly pear cactus on alcohol consumption are equally impressive. I see also that research has shown that it can help reduce the effects of excessive alcohol consumption if used prior to drinking. This effect has been substantiated firsthand by a friend, TM Kumar. Everyone can benefit from supplementing with prickly pear cactus, but especially diabetics, the obese, and athletes. You can either buy the pads, fruits and jellies fresh, in small Hispanic markets or in extract form from your favorite supplement supplier. As always if under a doctors care or prescription medications check with your doctor. Otherwise give this ancient plant a try. Good Luck...