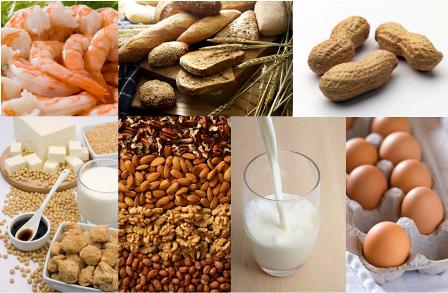 According to the National Institute of Allergy and Infectious Diseases, a food allergy occurs after proteins in the food enter the bloodstream and an allergic person’s immune system produces IgE, or immunoglobulin E, an antibody reacting to a certain food. The food-specific IgE then attaches itself to cells in the blood and body tissue, like the skin or nose, setting off allergic reactions such as eczema, coughing, hives or swelling in the mouth.
Because so many allergy-causing foods are used as ingredients in other foods, avoiding the triggers can be a challenge. Scientists have examined hundreds of potential culprits for these increases. From the increased use of pain relievers to a lack of vitamin D. Experts now seem to be saying the cause is likely a combination of three main factors: housing, the control of infectious diseases and lifestyle changes, like diet and exercise.
Peanuts are one of the most commonly heard of food that people are allergic to. For some people who eat them they can be life threatening. Peanut allergies amongst the under 5 year olds doubled between 1997 and 2002 and experts suspect a further increase.

Believing that whatever you ingested is harmful. Food allergies can range from skin rashes, like eczema, to anaphylactic shock, which is a life-threatening, full-body reaction that can lead to breathing difficulties and collapse.
Allergists say they're now seeing more children with multiple allergies than ever before, and not just to foods such as milk and wheat but to global foods such as sesame and kiwi fruit.

According to the National Institute of Allergy and Infectious Disease, every year in the States there are more than 30,000 episodes of anaphylaxis, resulting in 100 to 200 deaths.
Today many schools and childcare centers ensure that common foods that are known to be the source of serious allergic reactions, such as peanuts are not available. Many states have implemented allergy guidelines, for schools.

In the past decade alone, food allergy, once an uncommon condition, has skyrocketed. The Food Allergy & Anaphylaxis Network, the U.S. education group, estimates that about 12 million Americans, 4% of the population, now contend with an allergy. The Canadian rate of food allergy is estimated to be comparable. Peanut allergy alone has doubled in young American kids.
In our world, allergy has spread like wildfire. Scientists are certain that genes alone can’t be the whole reason why. Dr. Michael Cyr, an allergist and immunologist at McMaster University in Hamilton, Ontario, explains that "The genetic pool does not dramatically change over just decades.” “So it’s obvious there’s something else going on.” That something appears to be our environment. The experts who are looking at why allergies appear to be on the rise have come up with a number of theories. Scientists may have a basic understanding of how allergies occur, however, the complex immune system remains in many respects a puzzle. 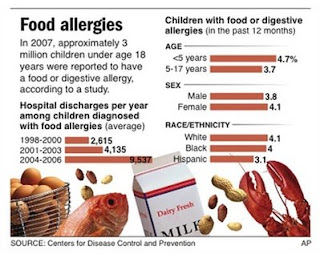 Food intolerance are more common than food allergies, and are not caused by the immune system. Symptoms of intolerance, like abdominal cramps, may be similar to those of allergies, accounting for the misconception. Food intolerance's can be caused by factors such as food poisoning, additives like sulfides or MSG, and high histamine levels in some wines, fish and cheeses. In the case of lactose intolerance, an enzyme deficiency is the culprit for a difficulty in digesting lactose.


As news spread from European farm studies that exposure to cows, pigs and poultry was helping to protect against allergic disease, scientists began to wonder,could this protection be elicited from non-working animals, specifically dogs and cats? Dr. Dennis Ownby is one of the leading researchers in this area. In 2002, he and a team of researchers from Henry Ford Hospital published findings in the Journal of the American Medical Association that were surprisingly contrary to the long-held belief that pets in the home would lead infants to develop allergies. Dr. Ownby’s group conducted a study of 474 healthy Detroit children from birth to age 6, examining how exposures to cats and dogs affected the participants’ rate of sensitization to common allergens, including the animals themselves, mold, ragweed, grass and dust mites. 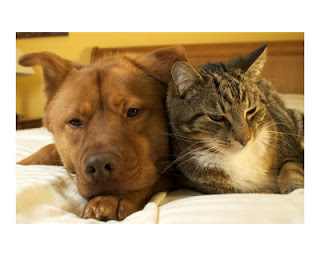 The results showed that when infants in the first year of life lived with two or more dogs or dogs and cats in combination,  their risk of developing allergies at 6 or 7 years old was less than half that of kids who hadn’t had any pet exposure. In an interview, Dr. Ownby said: “There is something about being around an animal that changes the immune system so that you’re less likely to be allergic to anything.”


Something in Our Food that Wasn't There Before?

Absolutely! Processed foods in general can contribute to allergies for a number of different reasons. Most processed foods contain a variety of food colorings, flavors, preservatives, and other additives can have a major impact. This however is is where the smart money is now.

In the mid-1990's, new food proteins were engineered and introduced into our food supply, yet most people are still, to this day, clueless about this. It was clearly done to maximize profitability for the food industry, yet NO human trials were ever conducted to see if these genetically engineered proteins were actually safe for animal or human consumption. STOP! re-read that last paragraph again. One of the first foods to undergo this change was milk, which incidentally is also the number one food allergen in the US. In 1994, the dairy industry started using a genetically engineered growth hormone, rBGH (recombinant bovine growth hormone) on cows in order to increase milk production. However, it resulted in higher rates of disease in the treated livestock. To counteract the ill effects, dairies also had to start using more antibiotics, which we now know is one of the driving factors behind the rise in antibiotic-resistant superbugs in humans. While Canada, the UK, Australia, New Zealand and 27 countries in Europe refused to use rBGH due to the fact that it had not been proven safe. The United States took the opposite stance, and basically decided that since it hadn't been proven dangerous, it would be allowed for human consumption. As inconceivable as it may seem, prior to rBGH being introduced into the milk, and every other conceivable dairy product, that millions of Americans consume every day, it had only been tested on 30 rats for 90 days!


Another common ingredient in processed food is soy, which is also one of the top eight food allergens.  Again, we see the presence of something "foreign" as the vast majority of soy now grown in the US is genetically engineered to withstand massive doses of weed killer. Ditto for corn. Corn allergies are on the rise, and while some genetically modified corn is engineered to withstand Monsanto's herbicide Roundup, other varieties are engineered to create their own internal pesticide Bt toxin.  The biotech industry claimed there were no health risks to worry about from these altered foods. In the case of Bt corn, the concern that your gut might turn into a pesticide factory was shrugged off with lame assurances that the Bt toxin wouldn't survive once ingested. However, just last month, a study revealed that Bt toxin was detected in:

Wow! industry lied to us again, just to improve their bottom line, what a suprise...

If you think you're suffering from a food allergy and notice symptoms shortly after eating a specific food, then that's a good place to start. Keep in mind that you can also be sensitive to food additives like artificial colors, preservatives and flavor enhancers like MSG, so closely read labels if you're having allergy symptoms.  One of the best things you can do if you believe you are suffering from a food allergy is to do a diet elimination challenge. Simply remove all foods that contain what you believe you are allergic to and see if your symptoms improve over the next few days. You may need to go as long as five days to give it a full trial. Good Luck...