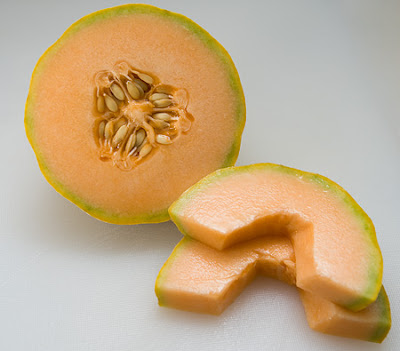 Sorry to be the bearer of bad news today, but here it is according to the LA Times:

The bacteria at the center of the nation's listeria outbreak from tainted cantaloupe are stealthy bugs. They won't make you immediately clutch your gut or break out in a fever — it could take weeks or as long as two months to become ill with listeriosis.

The contamination already ranks as the nation's deadliest outbreak of food-borne disease in more than a decade. So far, tainted cantaloupes have been blamed for 13 deaths and more than 73 illnesses. And that toll is likely to rise as authorities receive more test results for the four outbreak-associated strains of Listeria monocytogenes that have been identified by the U.S. Centers for Disease Control and Prevention.

The source of the contaminated melons has been traced to Jensen Farms in Colorado, and an international recall is underway while investigators look into the matter.

Dr. William Schaffner, an infectious-disease specialist and chairman of preventive medicine at the Vanderbilt University School of Medicine in Tennessee, said the vast majority of people in the United States “are going to be just fine. And, in fact, the majority of people who eat the cantaloupes in the infected shipments are going to be just fine.” Along with CDC instructions, Schaffner has helped answer some common questions:


What symptoms should I be on alert for?
Pay close attention to flu-like symptoms, Schaffner said. Caregivers, too, need to be on alert for intestinal distress such as diarrhea, cramping pain, headaches and fever in young children, the elderly, pregnant women and anyone already suffering from an immune-compromising illness.


What should I do if any of those symptoms crop up?
“There's going to be a certain amount of judgment,” Schaffner said. He emphasized that there is no reason to rush to an emergency room if you realize you ate cantaloupe in the last two weeks. “If you are feeling just a little bit out of sorts, just watch yourself. But if you develop diarrhea, especially diarrhea along with a fever, you need to go see a healthcare provider and let them know” you ate cantaloupe.


How long does it take for the symptoms to appear?
Schaffner cautioned that this infection can take a “smoldering” course before it makes someone ill.

“It can take several weeks,” he said. “This outbreak is not over. Some of the cantaloupes that have been sold are in homes, some are in refrigerators, and some who have eaten [the infected melons] haven't gotten sick yet.”


What happens if doctors suspect that listeria is the cause of my illness?
If you are ill and doctors suspect listeria, you can expect to be subjected to stool and blood cultures to pinpoint a diagnosis. In extreme cases, a lumbar puncture could be necessary to retrieve spinal fluid for testing. Treatment revolves around aggressive antibiotics, he said.


What if I have a cantaloupe sitting on my counter, or diced up in the refrigerator?
Unless you can be certain that the cantaloupe did not originate from Jensen Farms in Colorado, the CDC suggests that you throw it out.

Do not assume that because it has been sitting in the fridge that it's OK . In fact, it could be worse, said Schaffner, because the bacteria at the center of this outbreak are especially “tricky.”

“It likes the cold of a refrigerator. This bug, rather than going dormant in the cold, it multiplies. Prolonged stays in a refrigerator...can actually increase the risk.”

Some experts have advised washing the melons to reduce risk. Schaffner, however, stressed that consumers should follow the CDC's guidelines: If in doubt, throw it out. “Washing reduces the level of contamination, but it doesn't sterilize the cantaloupe,” he said.


So toss all your cantaloupe for now to be safe. I did, and I hope you haven't eaten a bunch lately, like me! Good Luck...


Have A Great Weekend !!
FOR A FREE INTRODUCTORY WORKOUT OR DIET CONSULTATION PLEASE CONTACT ME DOC MASTERS AT flexappealdoc@hotmail.com

Posted by Thomas "Doc" Masters Owner Of Flex-Appeal Personal Training in Dana Point, Ca. at 9:29 AM