Epitaph To My Mentor Jack LaLane

One of my earliest memory I have of watching TV was when I just started walking and I watched my mom following the exercises on the  “The Jack LaLanne Show” on a small black-and-white set and mom tried to do the exercises as Jack LaLanne demonstrated them. Jack, passed away at 96 on Sunday. Jack  pioneered the fitness show genre. His show ran for 34 years, starting in 1959. Jack in a space roughly the size of a storage locker, with a chair as his only prop, doing jumping jacks and pushups and various other mostly calesthetics. Always energetic, always wearing his trademark belted jumpsuit. I grew up answering to Jack. He was always there with his endless ramblings of encouragement. Jack was like a super hero.
Quite simply, Jack LaLanne was Mr. Fitness. There were no others. Hard to believe in today’s fitness and diet crazed society that there could be just one. There was no Tae Bo, no Boot Camp, no Chuck Norris infomercials. Just Jack LaLanne. He was all we needed. Jack talked us of the benefits eating only raw foods in an era when macaroni and cheese was considered a vegetable. Jack LaLanne became the lone voice in the wilderness during the late 1950s and early 1960s, when the average American considered the four food groups to be sugar, fat, grease and alcohol. Jack was the voice of health when doctors did advertisements for cigarettes. Everyone loved  Jack LaLanne even the guilty. He just had so much enthusiasm and energy. You wanted to be like him; a relentlessly positive, dynamo in a cool body suit.


Jack opened his first health club in Oakland in 1936. He created a chain of 100 health clubs. He came to represent the best of all juicers, the Jack LaLanne Juicer with his always energetic infomercial.
For decades LaLanne topped himself with various public strongman stunts ;

Jack once joked that he could never die, because it would ruin his reputation. So he lived to the ripe old age of 96. There have been other fitness leaders that have disappointed us with their life spans. Natural foods pioneer and author of the best selling “Stalking the Wild Asparagus,” Euell Gibbons, died at 64. Running book author Jim Fixx dropped from a heart attack at 52.  Jack LaLanne knew that to be the real deal you had to live a long time. He had no choice. Sometimes when celebrities die, it makes us feel old.  Jack LaLanne, he had been old longer than most of us have been alive. I owe my life's work to those first exposures to Jack and his philosophy. So do every one of the hundreds of people I've trained and affected their lives in a positive way. It all started with Jack and that little black and white T.V. Some people should just never die... People like Jack LaLane... 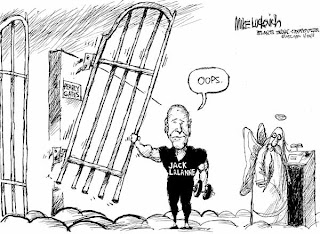