Searching for a shortcut to weight loss? If so, you're part of a long tradition. For at least 100 years, people have been wearing full body rubber suits in hopes of melting away pounds.

The idea is simple: Heat up your body, and you'll supposedly burn fat. In these ab-conscious times, perhaps it's only natural that you can now buy weight loss wraps specifically for your midsection. The best known option is the Belly Burner. The Belly Burner T.V. ad shows people wearing the band while pushing a stroller, walking in the park and lifting weights in the gym. You can buy it at many drug and department stores for about $20. (It's often sold in the As-Seen-on-TV shelves, along with the ShamWow! and PediPaws.) Danskin, the dance wear company, makes a similar product called the Waist Trimmer Belt. It's made out of fuchsia neoprene and is sold online for about $13. The TV ad for the Belly Burner says that the band "increases your thermal core temperature accelerating the fat-burning energy needed to trim down those love handles." This claim is backed up with thermal images showing that the midsection does, in fact, get warm underneath the Belly Burner. The ad goes on to say that using the Belly Burner is the "absolute fastest way to get those fit and trim abs you've been dreaming about. The ad also features a couple of celebrity endorsements, including this testimonial from comedian Carlos Mencia: "I started working out with the Belly Burner, and I literally went from a size 38 to a size 32. That's real."  A caption  then explains that the drop in weight happened over just eight weeks. The inventor of the product, comes along and says that "results will vary depending on level of activity. "The Belly Burner should be used in conjunction with a fitness routine and a healthy eating regimen." Wait ...won't a fitness routine and healthy eating burn the belly by itself? 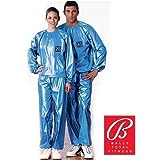 Just like a rubber suit, a neoprene wrap around the belly will definitely make people sweat. Depending on the intensity of the workout, you could sweat a lot. There's a big difference between sweating and losing fat. The Belly Burner or any other neoprene wrap would actually make it harder to burn body fat and tone abdominal muscles. When a person wears a snug wrap around the belly, the muscles that normally support the midsection can relax, he explains, so they don't burn as many calories or get as toned as they would without the wrap. That's why informed trainers have been moving away from weightlifting belts for the last ten years. The only time I would have a client wear any type of belt is when they're coming off back injury, and that would be under the guidance of a physical therapist or doctor. Though a neoprene band wouldn't be as dangerous as a full body rubber suit. Those death traps have been known to cause extreme elevation in body temp. In extreme cases have been known to contribute to death. Yes DEATH ! People just stop with the gimmicks already. Sweat from the workout not the belt.Good Luck...


FOR A FREE INTRODUCTORY WORKOUT OR DIET CONSULTATION PLEASE CONTACT ME  DOC MASTERS AT  flexappealdoc@hotmail.com
Posted by Thomas "Doc" Masters Owner Of Flex-Appeal Personal Training in Dana Point, Ca. at 10:28 AM